Pleurocera canaliculata and the Process of Scientific Discovery

Editor's Note - This essay was subsequently published as: Dillon, R.T., Jr. (2019c) Pleurocera canaliculata and the process of scientific discovery.  Pp 71 - 76 in The Freshwater Gastropods of North America Volume 3, Essays on the Prosobranchs.  FWGNA Press, Charleston.

Looking back on my post of two weeks ago [1], I fear I may have left the impression that Rob Dillon is smarter than Calvin Goodrich, and indeed smarter than any other malacologist who has ever waded knee-deep into the rivers of the greater Midwest before or since.  That's probably not an uncommon failing of mine, but nothing could be farther from the truth.  In fact, the revelation that the gastropod populations we have been calling Pleurocera acuta for 189 years are actually the same as what we've been calling Pleurocera canaliculata for 192 only dawned on me after several years of being dope-slapped by the glaringly obvious.  And even then, I was only able to figure out the "Goodrichian" relationship between P. acuta and P. canaliculata backwards, through P. pyrenellum.


So to set the situation aright, I hereby offer an amendment to my essay of 3June13.  And in this retelling I propose to lay bare for my readership the agonizingly slow process by which this particular snail-guy's mind actually works.

The initial revelation that Goodrichian taxon shift might be even more dramatic than Calvin Goodrich himself realized first dope-slapped me in the back of my head eight years ago, as I scored a set of allozyme gels comparing pleurocerid populations from the upper Powell drainage on the Virginia/Tennessee border.  I wrote this the bottom of my data sheet late in the afternoon of October 4, 2005: "Good grief!  Pleurocera unciale and Goniobasis clavaeformis at the mouth of Indian Creek are a single random-breeding population!"  John Robinson [2] and I wrote this initial evidence of Goodrichian taxon shift into a gray literature report in 2007 [3].  I then sampled additional populations of nominal clavaeformis, unciale, acutocarinata, curta, carinifera and vestita across East Tennessee and North Georgia in 2008-09, ran a big mess of additional gels, and published the formal paper subsuming the genera Goniobasis and Elimia under Pleurocera in 2011 [4].

Meanwhile, my general survey of the freshwater gastropod fauna of East Tennessee was moving forward.  I spent at least a week or two working in the rivers and streams between Knoxville and Chattanooga each field season between 2007 and 2010, collecting (what I recorded as) P. clavaeformis (in its various phenotypic forms) in essentially every stream I visited for four years.  And incidentally, I also observed that the big river populations (historically referred to P. unciale or curta) sort-of petered out around Knoxville, to be replaced in the main Tennessee River by Pleurocera canaliculata.

I took a second dope-slap to the back of my noggin at approximately 4:30 PM on August 14, 2010.  Standing knee-deep in Savannah Creek (maybe 20 km N of Chattanooga) on that memorable day, it suddenly struck me that the snails crawling around my feet might be Pleurocera acuta.  At that point in my career, I had collected Pleurocera acuta up in Kentucky, Ohio and Michigan, but would not have expected a P. acuta population anywhere within 500 km of the stream where I was standing.  When I got back to my truck, I wrote this in my field notes: "(star)Wow(star)  Is this Pleurocera acuta??? My eyes are opened!"

So back in Charleston, I pulled four years of old samples off the shelves, dug the old literature out of the file cabinets, and (over the course of several weeks) pieced together the following line of reasoning.

Inference.  The snails I collected in Savannah Creek on 14Aug10 must be what Goodrich would have called "Pleurocera pyrenellum," not Pleurocera acuta.  Goodrich (1940) gave the range of P. pyrenellum as "tributaries of the Tennessee River in Morgan and Lancaster Counties, Alabama, and Walker County, Georgia" [5].  Walker County wasn’t much more than 20-30 km downstream from Savannah Creek.  So "pyrenellum" my snails would seem to be. 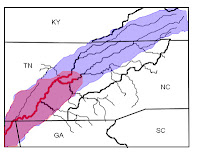 Therefore Pleurocera pyrenellum populations inhabit Tennessee tributaries further upstream than Goodrich realized.  Going back through my old collections, I recognized P. pyrenellum at 10-12 additional sites, extending up the Tennessee Valley all the way to the environs of Knoxville [6].  They were usually mixed with populations of P. clavaeformis, and (dazzled as I had been by the phenotypic variety of clavaeformis) I had simply missed them.

Revelation.  Travelling down the main Tennessee valley from Knoxville to Chattanooga, Pleurocera canaliculata begins to appear in the main river (red above) as P. pyrenellum begins to appear in the tributaries (pink).  This was the third major dope-slap I took during my long bewilderment with the East Tennessee Pleuroceridae, although I didn't record the date and time of the whacking.  The relationship between pyrenellum and canaliculata looks exactly like the Goodrichian relationship between unciale/curta and clavaeformis (blue above).

Hypothesis.  But the range of P. canaliculata extends throughout the greater Midwest, up the Ohio River all the way to Pittsburgh, while nominal pyrenellum populations are restricted to drainages of the Tennessee.  So might the small-stream form upstream from all those populations of canaliculata in Ohio, Kentucky, Indiana and Illinois be what everybody calls P. acuta in Yankeeland?

The point of this confession is that my colleagues and I were no more able to see the Goodrichian relationship between acuta and canaliculata standing on the shores of the Wabash River than Calvin Goodrich [7].  I flipped the whole story around when I told it two weeks ago, so that it "made sense," following the conventional practices of science.  I made the process of discovery look logical, even inevitable, when it most certainly was not.  I'm really a bonehead.  Ask my wife.

Allow me to close with another of my philosophical peregrinations.  My regular day-job is teaching majors-level genetics at a very ordinary liberal arts college of regional reputation.  It’s a big chore – there are three or four other members of my department doing the same thing.  All younger than I, of course.

So I organize the subject matter of genetics historically, the way I myself learned it, starting with Mendel, then Morgan, then Beadle then Avery and McLeod and McCarty and Watson and Crick and so forth.  And just when it begins to look like we might get anywhere near the present day, I go back to Hardy and Weinberg and finish with the "Modern Synthesis" of the 1930s and 40s.

Some of my colleagues tell me that undergraduate students "don’t get this."  They prefer to start their majors-level genetics sections with our modern understanding of the molecular basis of inheritance, because given the underlying mechanism, Mendel's 1866 results become a lot easier to explain.  And the kids prefer to focus on today's science, in any case.  They don't care about peas.

That line of argument is so self-evidently horrific to me that in my first draft of this essay, I left it dangling in the wind, without comment.  Like Stede Bonnet on the Charleston battery.

But I shall close with the simple observation that the K-12 teaching of science and the profession of science in higher education are two entirely different things.  In the former we are building palaces, and in the latter we are laying roads.  I trust that my readership has enjoyed this month’s brief foray into road building.  Next month, it’s back to the masonry.

[2] John D. Robinson was working on his MS in Marine Biology with me at the time.  He went on to earn his PhD at the University of Georgia and has recently moved to the Cornell area.

[6] By the 8/2011 debut of the FWGTN website, I had documented 8 populations of P. canaliculata in the big rivers below Knoxville and 24 populations of nominal "P. pyrenellum" in the tributaries.  Since I've decided to save the nomen "pyrenellum" as a subspecies (more about that in a future post) the distribution of both shell forms is still apparent on the pdf  map available from the P. canaliculata page on the FWGNA site.