Although we strive to maintain a broadly American perspective, some regionalism is bound to creep into any project involving such profoundly local creatures as freshwater mollusks. Looking back over my posts in the last several years, I fear I may have focused on invasions by spectacular viviparid and ampullariid gastropods in the southeast (1), while neglecting equally important offensives launched in the north and west by a smaller-bodied but far more numerous army, that of Potamopyrus antipodarium.

The "New Zealand Mudsnail," (or simply "NZMS") was first reported in North America in the mid-1980s, from the Snake River of Idaho. Our colleagues Dave Richardson, Dan Gustafson, Billie Kerans, and others have developed a marvelous web-based resource to track the spread of this critter in the West, as well as to catalog the burgeoning literature regarding all aspects of its biology [link turned off]. There is also a NZMS Conference, which had its fifth meeting in 2007. 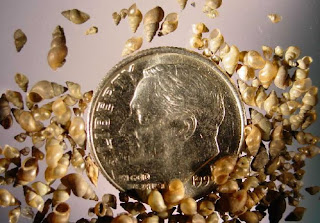 Although the natural habitat of the NZMS is generally considered to be the muddy margins of lakes and rivers, in the media it is almost always associated with pocket change. The photo above is from the Washington Department of Fish and Wildlife.

The biggest news for 2008 has been the spread of P. antipodarium into Lake Michigan. NZMS populations were first reported in Lake Ontario in 1991, and in Lake Erie in early 2005 (2), so the arrival of the snail in the other Great Lakes would seem a foregone conclusion. But the Lake Michigan discovery (3) was picked up by the Associated Press, and in mid-August I found myself reading a quote from our good friend Kevin Cummings (of the Illinois Natural History Survey) in the Charleston (SC) Post and Courier.

The other big news from the NZMS front seems to be the spread of the snail into northern California and southern Oregon. In late 2007 Potamopyrgus was reported in Lake Shasta, and in early 2008 populations were discovered in the Umpqua and Rogue Rivers, prompting the usual hand-wringing in the newspapers locally.

Is it possible to predict (4) biological invasions of this sort? The 3 mm Potamopyrgus reproduces parthenogenetically and grazes on algal cells and fine organics in the cold, clear trout streams of the Yellowstone region. What ecological characteristics might this "mud snail" share with a 70 mm "apple snail," laying eggs on emergent vegetation, consuming whole macrophytes in stagnant ponds near Myrtle Beach? All the important variables, it seems to me, can be collapsed into two - one of the organism and one of the environment.

Successful invaders must have "weedy" life history adaptations. Although there are many correlates of weediness, I suggested in my book (5) that the key variable might be relative reproductive allocation. Populations allocating energetic resources to reproduction greater than one order of magnitude beyond expectation for their body size I called "R-adapted," for "Ruderal" (6). Although I'm not aware of any direct data, I suspect that both Potamopyrgus and Pomacea are R-adapted.

The other factor is easy to state but much more difficult to measure than reproductive allocation. Successful invaders must find resources available for exploitation. Thus invasive species tend to be ecologically different in some significant respect from (initially far more numerous) native populations with which they might otherwise compete. In the golden days of community ecology this was called the "empty niche hypothesis", although ultimately the definition of the word "niche" became confused. In any case, it is clear that Pomacea could not have invaded the ponds in Myrtle Beach if all the macrophytes had already been eaten by Manatees.

So it seems to me that the two characteristics successful invaders tend to share are that they are weedy and different. All the exotic freshwater mollusks we have seen spread across the United States in the last century - Potamopyrgus, Pomacea, Bellamya, Melanoides, Bithynia, and yes, certainly Corbicula and Dreissena - seem to have high reproductive capabilities (relative to their body sizes) and are strikingly different from the native North American freshwater molluscan fauna that they have joined.

So am I going to step forward with a prediction of North America's next foreign invader? Nope. To do that, I'd want to be familiar with the freshwater molluscan faunas of five other continents. And I don't even know our own yet!

(1) I have written at least three posts on the Pomacea invasion, most recently August '08. My most recent update on the Bellamya invasion was in October '05.

(3) The benthic samples were taken in 9/07 by workers at the INHS Lake Michigan Biological Station, but apparently not processed until earlier this summer.

(6) This is not to be confused with the little-r of "r and K selection."
Posted by Rob Dillon at 9:38 PM No comments: