Mitochondrial Superheterogeneity: What it means

Editor’s Note – This essay was subsequently published as: Dillon, R.T., Jr. (2019c) Mitochondrial superheterogenity: What it means.  Pp 155 - 161 in The Freshwater Gastropods of North America Volume 3, Essays on the Prosobranchs.  FWGNA Press, Charleston.

Last month [1] we reviewed, or at least touched upon, 15 separate reports of double-digit mtDNA heterogeneity within gastropod populations published over the last 20 years, the paper by Whelan & Strong [2] among the best and most recent.  Three additional reports from pulmonate snail populations have subsequently come to my attention [3].  The discussion sections of almost all of these works have featured lists of possible explanations for the phenomenon, including population fragmentation, great antiquity, introgression from other species and cryptic speciation, many of which do not seem to fit the data as it has now accumulated, none of which is complete.

So Rob Dillon’s model to explain mitochondrial superheterogeneity begins with an observation (not an assumption, in the case of pleurocerid snails) of large numbers of super-isolated populations.  Then I add two more super-assumptions: super-long time and super-rare dispersal events.  And let me begin with an extended analogy.

The even-toed ungulates first evolved in the Eocene Epoch, about 50 mybp.  So today, the mtCOI sequence divergence between American bison (JF443195) and the wildebeest of the Serengeti (JX436977) is approximately 15%.  I suggest that when we stand on the bank of the Green River in Polk County, NC, and look down at the population of Pleurocera proxima grazing over the rocks, it is as though we were Lewis and Clark, looking over a vast herd of American bison [4].  And should we drive 80 km west to Buncombe Co, NC, and look down on the Pleurocera proxima population inhabiting Bent Creek, it is as though we were Frederick Russell Burnham standing before the wildebeests.

Now suppose that every million generations or so, a wading bird with sticky feet transports one snail from Buncombe County to Polk County, as though a modern zookeeper were to airlift a wildebeest to Wyoming.   I don’t know, but it seems likely to me that our jet lagged wildebeest might find itself perfectly well-adapted to graze on the plains of Wyoming in all respects, morphologically and physiologically.

But it does not seem likely to me that a single wildebeest could reproduce in a herd of American bison.  I imagine a variety of prezygotic reproductive isolating mechanisms have evolved between wildebeest and bison – appearances, smells, behaviors and so forth.  And even if a mating should occur, I feel certain all sorts of postzygotic incompatibilities have evolved - the chromosomes of the two species probably don’t match, a million screw ups occur in development, and nothing comes of it.

So (I admit) the most implausible element of my model is that, in the case of pleurocerid snails, a super-rare immigrant arriving via sticky-bird express must successfully mate within a host population from which it has been isolated for millions of generations.  There are several factors that make this phenomenon marginally less-implausible for pleurocerids, specifically.  Pleurocerid snails are aphallic, and no obvious mating behavior has been reported.  Apparently the male simply crawls over the female and deposits a spermatophore in her gonoduct, so unceremoniously that human observers typically don’t even notice it.  There’s very little light down where the snails live, so appearances don’t matter.  And pleurocerid populations typically inhabit waters with significant flow rates, so it seems unlikely that chemical mating cues could evolve.

Now why postzygotic reproductive incompatibilities have not evolved over millions of generations among such isolated gastropod populations, I do not know.  North American pleurocerids seem to demonstrate negligible anatomical diversity [5], and negligible chromosomal diversity to match [6].  I was tempted to add “super-stable environment” to my list of assumptions in paragraph two at the top of this essay, because it seems possible to me that stabilizing selection may have worked to prevent reproductive isolating mechanisms from evolving.

But I should hasten to add that very little of the reproductive biology I have reviewed directly above applies to pulmonate land snails, and that it was in land snail populations mitochondrial superheterogeneity was first discovered [7].  The bottom line seems to be that, over a wide range of mating systems, populations as isolated as bison and wildebeest have not speciated in gastropod world.  The plains of snail-America and snail-Africa are both grazed by reproductively compatible “wildebison.” 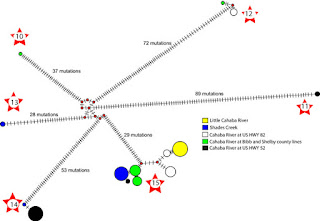 The first-most amazing thing about this data set is that an individual Cahaba wildebeest was apparently able to mate into the Shades Creek bison herd, despite millions of generations of isolation.  And the second-most amazing thing is that Whelan & Strong happened to sample both Shades Creek and the Cahaba River, to show us what happened.  In most data sets of this sort, we simply find no clue.

So for example, in addition to the 17 copies of the modal CO1 sequence Whelan & Strong reported from the Cahaba River at US52, they also reported two copies of a 20% divergent sequence that matches nothing else in their database, way off at red-star-11 [8, 9].  Did that rare mitochondrial genome come from a third population of “wildecamels,” currently grazing on some other continent that W&S did not sample?  Or might that genome have originated in an extinct population of “wilde-Irish-elk,” now gone?   A fascinating question.

I will close with two final notes.  First, I should emphasize that I have not evoked selection at any point during the essay above.  I very nearly used the S-word when I was waving my hands about the apparent absence of reproductive isolation among highly isolated gastropod populations with a surprising range of evolutionary backgrounds, but (ultimately) held off.  The wildebison model is grudgingly neutral.

And second, my good friend John Robinson and I are currently simulating the evolution of mitochondrial superheterogeneity using the “ms” program of R. R. Hudson [10]. Our preliminary results have not yielded the phenomenon in single-population models given any reasonable values of mutation rate (u) and population size (Ne).  Our two-population models do, however, yield mitochondrial superheterogeneity within reasonable values of u and (perhaps-surprisingly low values of) Ne, given (super-rare) migration rates around Nem = 0.0001 genomes per generation.

I find all this quite interesting as a study of evolutionary science, pure as the driven snow, and (I feel sure) a large fraction of my readership does as well.  But in situations such as the pleurocerid fauna of Alabama, research efforts have been at least partly motivated by conservation concerns regarding the distribution of potentially endangered species.  What might mtDNA sequence data sets such as developed by Whelan & Strong, riddled (as they are) with superheterogeneity, tell us about the species relationships of the populations sampled?  Tune in next time!

[1] Mitochondrial Superheterogeneity: What we know [15Mar16]

[4] The populations of Pleurocera I’m using as examples here were sampled in Dillon, R T. and J. D. Robinson (2009)  The snails the dinosaurs saw: Are the pleurocerid populations of the Older Appalachians a relict of the Paleozoic Era?  Journal of the North American Benthological Society 28: 1 - 11. [PDF].  I reviewed the Dillon & Robinson results in my blog post of March, 2009.  See:
[5] Dazo B (1965) The morphology and natural history of Pleurocera acuta and Goniobasis livescens (Gastropoda: Cerithiacea: Pleuroceridae). Malacologia 3:1–80.   Strong, E., 2005. A morphological reanalysis of Pleurocera acuta Rafinesque, 1831, and Elimia livescens (Menke, 1830) (Gastropoda: Cerithioidea: Pleuroceridae). Nautilus 119: 119–132

[7]  I almost cut the two paragraphs about the absence reproductive isolating mechanisms in pleurocerid snails entirely out of this essay.  But then I figured, hell, if the land snail people don’t like it, they can start their own blog.

[8]  For this calculation I used KT164003 as an example as the modal CO1 sequence from the Cahaba River at US52, and KT164004 as an example of the rare, divergent sequence, and compared the two using blastn.