Many of you will be familiar with the large invasive viviparid gastropods Bellamya (or Cipangopaludina) chinensis and B. japonica. Here in the U.S. one commonly sees Bellamya sold as a specialty item for the purposes of cleaning or clarifying the water in ornamental lilly ponds. The snail has been widely introduced into the wild - our colleague Jay Cordeiro has been monitoring their spread for several years. But the appearance of Bellamya is not generally greeted with the same alarm that accompanies the discovery of large ampullariid snails such as we discussed in August and September just past, primarily because Bellamya does not apparently eat living macrophytes. From a human standpoint, its introduction seems largely benign.

Below are three little news items involving American populations of Bellamya, the first personally collected, the second and third passed along from Jay Cordeiro and Rick Fox, respectively. All fall under the general heading of, "If the good Lord gives you lemons, make lemonade." Enjoy!


Bellamya Ranching in North Carolina
While on a field trip last month I was not surprised to discover large and apparently healthy populations of B. japonica in High Rock Lake and Tuckertown Reservoir, both impoundments of the Yadkin/Pee Dee River system in central NC. There were previous records from Lake Hickory of the Catawba River system next door, as well as several ponds and smaller populations scattered around the state. I would characterize High Rock and Tuckertown as "highly disturbed" environments, built in the 1920s by Alcoa for hydroelectric purposes and currently supporting a lot of recreational use, although such venues do not appeal to me personally (Photo below). 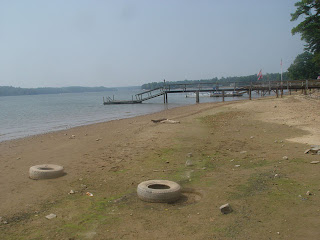 In any case, I had just finished making collections on High Rock at a very popular boat ramp east of Salisbury when I was approached by two state game wardens. They had lots of questions, and once we got beyond the usual "Who the heck are you and what the heck are you doing here?" our conversation turned to "these large snails." They related an interesting story.

Apparently one night in the not too distant past, their suspicions were aroused by a large band of fishermen seining or netting on the lake under cover of darkness. They and other officers swooped down on the nocturnal fisherman only to discover all their nets and coolers filled with "these large snails." The fishermen were Laotian, of Hmong descent. Since North Carolina does not apparently have any laws regulating the harvest of snails, the Laotian fishermen were allowed to continue.

I personally speculate that the Laotians may have previously "seeded" Bellamya into High Rock and Tuckertown Reservoirs. This may represent a previously unrecognized mechanism for the spread of Bellamya in the US. Of course, very few of us approve (in principle) of artificially spreading exotic organisms. But "snail ranching" to feed (perhaps impoverished?) people from what is otherwise an underutilized and already disturbed environment doesn't seem like much of a sin. If the good Lord gives you lemons...


Bellamya Roundup in Massachusetts
Our good friend Jay Cordeiro is calling for volunteers to hand-collect Bellamya from Johnson's Pond in Groveland, Massachusetts next Saturday, October 15. His (very cute!) PDF flier is available for download from the FWGNA web site [here]. Any of you in that part of the world are encouraged to contact Ms. Susan Park before October 10 for more details.

Jay is considering a mark-recapture study aimed at estimating the current size of the Bellamya population in Johnson's Pond, to be repeated over the next several years, in an effort to measure the effect of his roundup project. If he also launches a second mark-recapture survey in a nearby pond left undisturbed, he should be able to gather data on the regulation of population size in aquatic invertebrates of general importance. Looks interesting!

Jay tells me he plans to "euthanize" his Bellamya harvest. Any Laotian folks up in your part of the world, Jay? How about "boil?"


Bellamya as a Model for Invertebrate Anatomy
My thanks (and a tip of the hat!) go to Rick Fox of Lander University up in Greenwood, South Carolina. Rick has developed a truly impressive investigation for his Invertebrate Zoology laboratory featuring the dissection of Bellamya, and made his detailed notes and instructions available through Invertebrate Anatomy Online. The site is best viewed with MS Explorer - some of his 19 cleanly-drafted figures don't display with Netscape.

Posted by Rob Dillon at 3:20 PM No comments: