Every year about this time I deliver a lecture to my Biology 111 students entitled, "The Scientific Method." I always emphasize that this may be the most important lecture of their careers as scientists. And I begin by defining "science" as the construction of testable models about the natural world, accenting the word testable. A model need not be correct - in fact, it is commonly argued that no model of the natural world can ever be proven correct. But I always try to drive home to the freshmen that any hypothesis, theory or model of nature that is testable, verifiable, or falsifiable can make a contribution to science. Anything else is screwing around with a lab coat on.


Judging from subsequent examinations, however, I've been forced to conclude that the minds of college freshmen are generally focused elsewhere on the first day of class. And to judge from the quality of the typical paper published in the literature of evolutionary biology today, there are precious few opportunities to make up the missed material between the freshman year and the Ph.D. I suspect there's something about DNA sequence data in particular that promotes clueless data-dredging, but I digress. 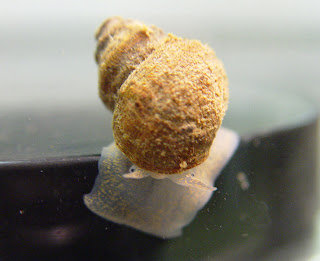 Earlier this summer my faith in the scientific method was refreshed by an email from Ms. Laura Kirk, Park Interpreter at Lee State Natural Area near Bishopville, SC. She reported collecting a snail from the nearby Lynches River unidentifiable through the dichotomous key I published on my brand new "Freshwater Gastropods of South Carolina" web site, not matching any of the photos or descriptions I had posted. She attached a photo of the beast, which after some correspondence I came to realize was Lioplax subcarinata (above). Hers was the first modern record of the species in this state.


The March 9 Version of my FWGSC web site, which was still up (as of August 24, 2004, but badly in need of revision), constituted a testable model of the natural world. I stated that there are 24 freshwater gastropod species in South Carolina. And in a matter of two months, a scientist with whom I had no prior contact disproved that hypothesis, bringing the total to 25. (There may now be a 26th species as well, but that's another story.)

This Saturday just past I traveled to Lee State Natural Area and was able to collect a large sample of Lioplax from the Lynches River. The river is perhaps 10 meters across in this region of the state, rather steeply incised into its banks. Fallen trees and woody debris constitute the only solid substrate. The water is generally turbid but has fairly good flow, over a bottom of sand and mud (below.) 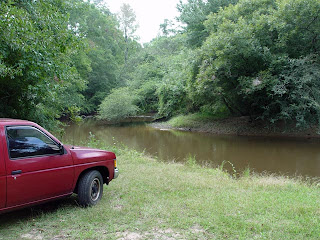 The Lioplax were burrowing in extremely flocculent mud in backwater eddies. "Burrowing" is a poor word for it, because the mud was very loosely aggregated in these pools, and would seem to require almost no extra expenditure of energy to penetrate. The snails seemed more "suspended in" than "burrowing through" the substrate. I made my collection by wading knee-deep into 4 cm of water and feeling with my hands.

The animals looked much like Campeloma, with very pale body coloration. They were unusually small for viviparids, none larger than 16 mm in shell length. But my examination of four individuals ranging from 12 mm to 15 mm showed all to be mature, one male and three females bearing early-stage embryos. Their shells bore spiral cords of varying strength, some quite fine.

The relevant paragraph on the "Recommendations" page of the present (9Mar04) version of my FWGSC site reads as follows: "There may be cause for some conservation concern regarding Lioplax subcarinata. This fairly large and conspicuous species is restricted to Atlantic drainages, nominally ranging from New York to South Carolina (Clench 1962). But Lioplax seems to have been extirpated from New York (Jokinen 1992), and we have been unable to confirm its presence here at the southern terminus of its range as well. Lioplax does seem at least locally common in North Carolina and Virginia, however, so the situation may not as yet be critical."

Although the penultimate sentence of that paragraph will obviously require some modification, I think the other sentences remain okay as they currently read, at least for the present. I still suspect that there may be some cause for conservation concern regarding Lioplax, depending on its abundance through the meat of its range to the north. Stay tuned!