Freshwater Gastropods of the Tennessee/Cumberland

Today we are pleased to announce the expansion of our FWGTN coverage from its East Tennessee origins though the entirety of the Tennessee and Cumberland River drainage basins, increasing our sampling area from approximately 22,000 square miles to over 58,000.  We document 54 species of freshwater gastropods with 16 additional subspecies in this malacologically rich region, offering ecological and systematic notes for each, as well as detailed distribution maps, a dichotomous key and a photo gallery.  This expanded web resource, coauthored by R.T. Dillon, M. Kohl and R. Winters, is available here:

The previous version of our FWGTN website, brought online in 2011 by Dillon & Kohl, covered only the Tennessee River drainage system from SW Virginia and western North Carolina through East Tennessee to skim the top of North Georgia and stop at the Alabama border.  Our 2011 database included 1,674 records from approximately 767 discrete sites, documenting 39 species and 2 subspecies.  The expanded database we release today includes 4,003 records from approximately 1,700 discrete sites, ranging though North Alabama and Middle Tennessee to clip the corner of NE Mississippi, plus a big slice across southern Kentucky as well. 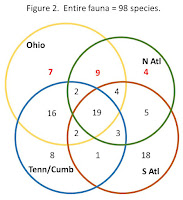 We also announce today the publication of an updated “Synthesis v3.1,” ordering our 107 species by their incidence in our continental database and assigning fresh FWGNA incidence ranks to all.

So, visit the FWGNA web resource again, for the first time!

Posted by Rob Dillon at 8:10 AM No comments: