On Getting Clappia in Tennessee

Editor’s Note – This essay was subsequently published as: Dillon, R.T., Jr. (2019c) On getting Clappia in Tennessee.  Pp 199 - 204 in The Freshwater Gastropods of North America Volume 3, Essays on the Prosobranchs.  FWGNA Press, Charleston.

The Powell River is one of my favorite places on Earth.  Running gently through a rich, narrow valley from southwest Virginia into East Tennessee, the Powell is home to about 17 species of freshwater gastropods, and perhaps twice that number of unionid mussels.  I first dipped a boot toe into those magical waters in the summer of 1975, as an hourly employee of the TVA working on mussel surveys, and have returned many times since.  I always see something new. 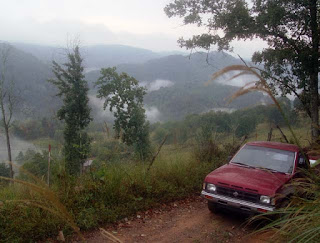 The Powell as it flows south into Tennessee is choked with pleurocerid snails – Leptoxis, Io, and three species of Pleurocera jostle each other for every square millimeter of benthic habitat.  This actually makes gathering observations on any other freshwater gastropod species extra-challenging.  As much as I love pleurocerids, I sometimes find myself wishing that they would all disappear for about an hour, so I could find anything else.

So I patted myself on the back in the summer of 2007 when I was able to confirm a population of Somatogyrus parvulus in the Powell River (marked “S” in the figure below).  Adult Somatogyrus are essentially indistinguishable from juvenile Leptoxis in the field (“L”), unless held up to close examination.  Their habitat was an important clue for me standing knee deep at midstream – I noticed a few suspicious little snails crouched Somatogyrus-like under rocks, when most of the Leptoxis population was grazing on top.

Then in 2008 I found a couple individuals of a second, more mysterious hydrobiid species in the Powell (C, below).  Again, they were mixed with a high density of Leptoxis, but this second population was more associated with woody debris in marginal pools than rocks at midstream.  Initially I thought they might be Amnicola (A), which does range through East Tennessee drainages, although not as commonly encountered as in Ohio drainages further north.  But back in the lab, they simply did not look like Amnicola.  I recorded them as “Birgella” in my database, which didn’t look right either, because the mystery snails were too small, and figured to come back to them in the future.

In 2010 I found samples of the same mysterious hydrobiid (C) at two sites in the upper Sequatchie River, another lovely mid-sized tributary of the Tennessee about 250 km SW of the Powell.  The Sequatchie also boasts a wonderfully diverse fauna of freshwater mollusks – certainly including Amnicola as well as a dense population of Leptoxis.  And again, to recover a completely vanilla 3 mm prosobranch gastropod from the waters of the Sequatchie that is neither a juvenile Leptoxis nor an Amnicola required something akin to divine intervention.  And once again, I labeled the mysterious little snails Birgella-with-a-question-mark and set them aside for future study, really rather distracted by the other 37 species of freshwater gastropods in the upper Tennessee drainage at the time.

So two years passed.  Then at the AMS meeting this past June I ran into my old buddy Bob Hershler, and he agreed to take a look at my (now three) samples of mysterious East Tennessee hydrobiid, and together we sorted the situation out.

Bob confirmed a simple, unlobed “lithoglyphine” penial morphology for the mystery populations, firmly ruling out Birgella and Amnicola, and suggested Somatogyrus.  But Somatogyrus are more heavily-shelled and found midstream – witness the population of S. parvulus in the Powell River rapids not two meters from the marginal pool favored by our mystery species. The mystery hydrobiids bear a lighter, slightly more inflated shell with an umbilicus.  A Somatogyrus with an umbilicus?  Does that ring any bells?

Last month we reviewed the life and work of Bryant Walker (1856-1936), touching at some length on Walker’s research interest in the hydrobiid genus Somatogyrus [1].  Attentive readers may recall that between 1904 and 1909 Walker described 22 species of Somatogyrus, including 21 that were indistinguishable and one that looked different.  That different one, “remarkable for its round, deep umbilicus,” Walker removed to a new genus Clappia in 1909 [2].

Clappia umbilicata was originally described from the Coosa River of Alabama, and has not subsequently been collected elsewhere.  In 1965 Bill Clench reported an additional population of Clappia inhabiting a tributary of the Coosa River perhaps 50 km west of the type locality of C. umbilicata, which he described as Clappia cahabensis, honoring the strict one-drainage-per-species rule enforced throughout the Mobile Basin [3].

But the sad fate of the Mobile Basin gastropod fauna will be well known to most of my readership [4].  Thompson based his 1984 review of the lithoglyphine hydrobiids on a museum lot of Clappia, considering C. umbilicata "apparently" extinct and opining that C. cahabensis "may also be extinct" [5].  Both species were more recently listed as extinct by Lydeard & Mayden [6] and designated as such on the IUCN Redlist.  Our colleague Stephanie Clark enjoyed 15 minutes of fame for rediscovering C. cahabensis alive back in 2005 [7].

Now it has become apparent that the range of Clappia extends well beyond Alabama, to include at least two mid-sized rivers in East Tennessee [8]. And given how lightly the freshwater gastropods of Tennessee have been surveyed, and how difficult such diminutive hydrobiids may be to find in the high densities of pleurocerids that characterize the entire region, it seems quite likely that additional Clappia populations yet remain undiscovered.

We know less about the freshwater gastropod fauna of some parts of the United States than we do about the surface of Mars.  At this writing NASA’s “Curiosity Rover” is firing laser beams at the Martian surface [9] and transmitting data through 100 million kilometers of space to rooms-full of the world’s greatest engineers, at a mission cost of $2.5 billion, delivered.  NASA scientists know what they don't know.

But it seems possible that I may be the first person ever to hold those little snails in my hand – not the juvenile Leptoxis, not the Amnicola, not the Somatogyrus, not the Birgella - the other little 3 mm snail with the vanilla shell and the vanilla penis in the organic debris in the quiet backwaters of the Powell River as it flows into East Tennessee.  Nobody knows what we don't know about North American freshwater snails.

I do not begrudge NASA its $2.5 billion budget [10].  I would simply like to point out that we do not need to travel 100 million km to dip our boot toes into the magical waters of the unknown.

[3] Clench, W. J. (1965)  A new species of Clappia from Alabama.  Nautilus 79: 33-34.  The primary difference between Walker's C. umbilicata and Clench's C. cahabensis seems to be body color, black for the former and white for the latter.  The mantles of the Tennessee populations do (generally) seem to bear black pigmentation.

[4]  For references on the conservation status of the Mobile Basin gastropod fauna see:

[9] Since 1898 there has been a narrative in western culture featuring an invasion by Martians, often involving robotic landers and death rays.  So now it materializes that NASA has mounted a laser gun on our most recent Martian Rover.  Apparently we kicked all the Nazi ass we can find, and kicked all the Commie ass we can find, and now we're up in space, kicking little green Martian ass.  USA! USA!

[10] This is because I cannot imagine any scenario where the subtraction of a single dollar from the NASA budget might yield even a penny for any funding source to which I might conceivably apply.  I don't understand money, at all.  But I think that funding for space research may be motivated by a combination of national pride, military paranoia, and Buck Rogers romanticism.  Although NASA takes the money and does some science with it (among other things), NASA's appeal is not primarily, or secondarily, or even tertiarily scientific.  But I do not understand money, at all.
Posted by Rob Dillon at 1:57 PM No comments: