Deep in the cypress swamps shrouding the remote southeast corner of North Carolina lie the mysterious waters of Lake Waccamaw. At roughly 9,000 acres and 4 miles across, Lake Waccamaw is the largest of the “Carolina Bays,” pothole-shaped depressions of unknown origin in an Atlantic Coastal Plain otherwise featureless in its topography. But beyond its unusual size, Lake Waccamaw is distinguished by its exceptional water quality. Groundwater filtering up through layers of sand and Plio-Pleistocene shell arrives in the big lake clear and near-neutral in pH, much in contrast to the acidic and tannin-stained waters prevailing elsewhere throughout the region (1). Although quite young geologically, one might not be surprised to find endemic species (2).

I first visited Lake Waccamaw in 1978, driving south from Philadelphia with Dr. George Davis, my Ph.D. advisor. Our mission was to sample the lake's endemic population of Elliptio waccamawensis for an NSF-funded project on unionid evolution (3). I vividly remember the abundance of the mussels that greeted us that spring morning we waded into the clear shallows together. George and I were able to sample 30 E. waccamawensis in a matter of minutes, with at least four or five other unionid species also moderately common (4). I did not focus on the gastropods that day, but do recall the hydrobiids like pepper on the maidencane.

The entire molluscan fauna of Lake Waccamaw was thoroughly surveyed shortly thereafter by Hugh Porter, working for the North Carolina Wildlife Resources Commission (5). Although I have not seen Porter’s (1985) report, several years ago I had the opportunity of reviewing the extensive collections he deposited in the NC State Museum. Sampling randomly on bottoms of four depth classes with a diver-operated suction dredge, Porter documented strikingly high abundances of the notable Lioplax subcarinata and Gillia altilis, plus the (more mundane) Campeloma decisum, Amnicola limosa, Lyogyrus granum, and the usual pulmonates (6). Especially common in Porter's samples was the little hydrobiid he called “Cincinnatia sp,” but which today is perhaps better referred to the genus Floridobia (7). There has long been speculation that this population may constitute yet another species endemic to Lake Waccamaw (8).

Has the entire diverse and endemic molluscan fauna of Lake Waccamaw now vanished before our eyes? In late May I drove up to the lake from Charleston for a long day of kayaking and puttering about in the shallows. I visited the southern (more exposed) shore near the dam and the northeastern (more protected) shore near the mouth of Big Creek, spending several hours in each area. I examined all wadeable environments and habitats, netted through the entire range of substrates, and found essentially nothing. I observed no more than a couple living unionids all day, and perhaps a handful of empty valves. No Gillia, no Lioplax, not even any Helisoma, and just a few living hydrobiids in the sediments around the macrophytes. I spotted several small Campeloma crawling in the sand, and some Physa bravely clinging to the debris.

I understand that many of the mollusk populations of Lake Waccamaw do not reach their maximum abundance in easily-accessible shallows (9). So the most alarming hours of my visit in late May were spent inspecting the beach drift, which (one might hope) would afford a more random sample of the lake fauna as a whole. In more than an hour of beachcombing on both shores I recovered only perhaps 20-30 tiny Floridobia shells the from grass wrack, 5-10 Amnicola, and a few small Campeloma, period.

Upon my return to Charleston I swapped an email or two with Dr. Diane Lauritsen (10), who has some thirty years of experience at Lake Waccamaw, and spoke with her on the telephone at length. Diane reported that the lake has suffered filamentous algal blooms recently, with an apparently correlated reduction in benthic macrofauna. Diane sent me the photo below. 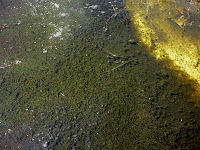 She mentioned that the Corbicula population (11), while never terribly abundant, suffered a "massive die-off probably four years ago." Diane suggested that Corbicula might be a "canary in the coal mine," telegraphing a warning of hypoxia. I was stunned. I had not seen any evidence whatsoever of Corbicula during my entire day on Lake Waccamaw, not one single bleached valve. In what sort of nightmarish environment might the nasty, invasive Chinese clam become a "canary?"

And what can be done? At the risk of sounding like the scientist I am, we need a formal study. Everything I have reported in the preceding seven paragraphs is anecdotal, and cannot constitute a basis for doing much else. Thank heaven the NCWRC had the foresight to commission Hugh Porter’s study in the late 1970s. The first order of business must be to see a study of that caliber repeated.

So in the end, this essay is an appeal to North Carolina natural resource agencies, the regional offices of conservation-minded NGOs, and Waccamaw-area citizens’ groups to renew our mutual interest in the biological treasure that is Lake Waccamaw. I fear this marvelous resource has been neglected in recent years. But I hope I am wrong.

(2) The nominally-endemic fauna of Lake Waccamaw includes three fishes described in 1946 and a caddis fly described by our colleague Jim Glover in 2004, as well as the unionids Elliptio waccamawensis (Lea 1863) and Lampsilis fullerkati Johnson 1984. The specific status of the two mussels has been called into question, however, in a recent MS thesis: Sommer, K. (2007) Genetic identification and phylogenetics of Lake Waccamaw endemic freshwater mussel species. MS Thesis, UNC Wilmington. [html - pdf]

(8) Porter suggested that the Lake Waccamaw fauna might include two endemic hydrobiids, which he called "Cincinnatia species 1" and "Amnicola species 1." He may be right about the former - populations of the little snail called variously Cincinnatia or Floridobia are quite unusual in southern Atlantic drainages. But Porter's samples of "Amnicola species 1" in the NC State Museum looked like unremarkable mixtures of Amnicola limosa and Lyogyrus to me.

(9) The lake bottom is rather heterogeneous, including some regions of (rather malacologically uninteresting) mud and peat, and other sandier regions that can support surprisingly high abundances of bivalves and gastropods. Benthic algae seem to extend to unusual depths in Lake Waccamaw. Or at least they did in the past.

(10) You might recognize Diane’s name from several excellent works Corbicula feeding, for example: Lauritsen, D. (1986) Filter-feeding in Corbicula fluminea and its effects on seston removal. J. N. Am. Benthol. Soc. 5: 165-172.

Our good friend Bill Clark has invited us all to a freshwater mollusk identification workshop out in Idaho this October, with bivalves and gastropods from throughout western North America on the lab benches. Download his flyer from the FWGNA site for all the details:

Bill's contact information is below. He tells me that his organizing committee has not set a firm registration deadline, but that they will need to have a good estimate of attendance sometime in September for planning purposes. "First come, first served."