Potamopyrgus in US Atlantic Drainages

Hidden deep inside last month’s big release of the new “Freshwater Gastropods of Mid-Atlantic States” web resource was at least one item of unwelcome news.  A population of  the New Zealand Mud Snail, Potamopyrgus antipodarum, has been discovered in Spring Creek, a small tributary of the Susquehanna River in Centre County, PA.  This is the first record of Potamopyrgus from a US Atlantic drainage.

The circumstances surrounding the discovery are interesting, possibly even edifying.  The Pennsylvania Department of Environmental Protection has long maintained a water quality monitoring site #WQN415 on Spring Creek at the County 3001 bridge, at which they collect regular macrobenthic samples.  And I paid a call on the PADEP lab in Harrisburg this past spring, as an important stop on my regional tour of similar facilities around the East, reviewing the freshwater gastropod components of (what typically turn out to be) large collections of vials stuffed with large collections of mostly bugs.  And I actually held a vial of macrobenthos collected on 7Oct10 from WQN415 in my hand this past March 20, and saw (what I remember as) a very large number of very minute hydrobiids washing around at the bottom.  And misidentified them as Fontigens.

I wrote “F. nickliniana teensy and weird” on line #415 of the spreadsheet I carried that day on my clipboard.  In retrospect, I’m surprised that I remember anything at all about any particular vial among the thousands I have examined over the last 18 months.  But I don’t think any of those (hundreds?) of tiny little gastropods contained in vial #415 was much over 1 mm standard shell length.  I don’t remember any individuals that looked like legitimate adults.  But surely a sample containing hundreds of individuals couldn't be comprised entirely of juveniles, could it?  In retrospect, my eyes were not prepared to see what they were looking at.

So six months later, our good friend Steve Means of the PADEP sent me an email inquiry with “New Zealand Mud Snail in Spring Creek, Centre County” on the subject line.  And the jpegs attached to his email (one of which is inserted above) clearly depicted adult Potamopyrgus antipodarum in the 4-5 mm range, collected this most recent summer at WQN415.  Oops!  A bit red-faced, I added P. antipodarum as species #41 to the Mid-Atlantic photo gallery, and composed species page #87 for the FWGNA site [1].

Potamopyrgus is a notorious invader, making its first North American appearance in Idaho’s Snake River back in 1987.  Populations spread to Montana in 1995, Oregon and California in 1997, and as far as Arizona in 2002 [2]. Most of the western populations seem to be associated with trout fishing, and it has been speculated that their spread has been facilitated either by untidy anglers, or by gut passage in the fish themselves.

Meanwhile back East, populations of Potamopyrgus were first reported in Lake Ontario in 1991, Lake Superior in 2001, and Lake Erie in 2005 [3].  The eastern populations seem more associated with commercial shipping, the implication being that they might represent a separate introduction via bilge water.  And recent research has indeed confirmed that the eastern and western populations represent genetically distinct clones [4]. 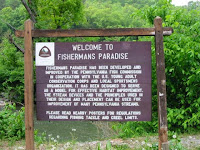 The Spring Creek population obviously inhabits an eastern longitude, but is quite intimately associated with trout fishing.  PADEP water quality monitoring station WQN415 is located approximately 1-2 km downstream from the Bellefonte State Fish Hatchery, on a stretch of river marked “Fisherman’s Paradise” in my topographic map book [5].  I understand from Steve that the hatchery does not import trout into its facility, from the West or anywhere else, and that recent benthic surveys show lower densities of Potamopyrgus at the hatchery, increasing downstream toward WQN415.  This strongly suggests that the source of the introduction has not been the fish, but the fishermen.

Might some transcontinental angler have carried a sticky creel or muddy set of boots all the way from Montana to Pennsylvania?  Or is the Spring Creek population a fresh introduction of the eastern clone, which has heretofore seemed primarily associated with commercial shipping [6]?  I understand that our colleagues Ed Levri of Penn State Altoona and Mark Dybdahl of Washington State University are working on this question as we speak.

Meanwhile, the Pennsylvania Fish and Boat Commission has issued the press release available from the link below:
Further spread throughout the Susquehanna drainage would seem inevitable, however, especially to nearby tributaries popular with the anglers.  Reference to the PFBC website [7] reveals a smorgasbord of Class – A streams in central Pennsylvania, including Logan Branch a few km to the east of Spring Creek and Buffalo Run a few km to the west.  Logan Branch even hosts a state trout hatchery.  Were I a researcher in the central Pennsylvania area interested in freshwater community ecology or energy flow, I’d begin planning my baseline studies in Logan Branch right now.

[1] For a broad review of the general biology, life history, ecology and systematics of the New Zealand Mud Snail, see the FWGNA species page...
[2]  ...or the USGS Nonindigenous species database:
[3]  See “Invaders Great and Small”  [19Sept08]

[4]  From the Aquatic Nuisance Species Taskforce:
[5] The image of the “Fishermans Paradise” sign comes from the PFBC website:
[6]  Although populations of the Great Lakes clone typically seem to reach maximum abundances at depths of 4 meters and below, recent surveys have uncovered populations in two small streams in western New York state, draining into Lake Ontario perhaps 300 km north of Spring Creek.  See Levri, Colledge, Bilka & Smith (2012) The distribution of the invasive New Zealand mud snail in streams in the Lake Ontario and Lake Erie watersheds.  BioInvasions Records 1: 215-219.

[7] Here’s a very nice interactive map from the PFBC:

Posted by Rob Dillon at 3:49 PM No comments: