I will open this essay with a confession, of sorts. On the afternoon of 6Mar11 I, Dr. Robert T. Dillon Jr., did in fact collect a small sample of freshwater gastropods from a filthy stream in the little town of Ojojona, south of Tegucigalpa. I recorded Stenophysa marmorata (5), Biomphalaria obstructa, and Uncancylus concentricus, not being terribly sure about those last two identifications. That's a disposable diaper floating about 2-3 feet in front of my right hand down there [click for panorama].
Strangely, none of the citizens of Ojojona seemed to show the slightest interest in what 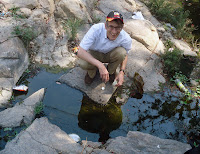 I was doing, squatting down in their little creek like that, even though a steady stream of pedestrians passed by on the bridge above me. In fact, one older gentleman came down the bank, unzipped, and pissed in the creek right behind me, without offering so much as a word of greeting.

Now I am quite familiar with certain regulations promulgated by US Customs and Border Protection regarding snails. Question 11c on the blue Customs Declaration Form which all arriving travelers must complete specifically inquires whether "I am (we are) bringing disease agents, cell cultures, or snails" into the United States. My answer last month was NO. By the date of my flight home, the sample I took from that little stream in the hills above Tegucigalpa had long been preserved in denatured ethanol and stowed in a white plastic bottle, deep in my day pack, in my checked luggage. That sample was no longer "snails." It had become "specimens for scientific research." That's my story, and I'm sticking to it. [Click the image below to see the full front of the form.]
Did I look guilty, approaching the Immigration desk in Atlanta? I handed the officer my passport, with blue customs declaration inside. He asked me just one or two very harmless questions, including my occupation, stamped my passport, and welcomed me home to the USA.

Did I transmit some sort of telltale body language as I waited to pick up my checked baggage? Did I glance around furtively as I rolled my luggage back through the corridor to where the US Customs Officer was sitting calmly on his stool, retrieving declaration forms? How did he know my name?

As I approached the Customs Officer he rose and asked if I were "Mr Dillon, the college professor from Charleston?" Yes, I admitted that I was. He then asked me pointedly, "Are you bringing any snails with you this afternoon?"

No, I replied, I was not. My Customs Declaration clearly stated that I was not. I had made no mention of snails to anybody, official or otherwise, not even a whisper. Yet somehow, I had been profiled as a Malacoterrorist!

The officer placed my passport and customs declaration in a clear vinyl pouch and instructed me to roll my luggage through the doors to my right, reporting to the third desk on the left. There to greet me was a stern and stubby woman of Hispanic descent, who asked me to open all my bags and began to inspect them thoroughly, all the while asking, "Do you have any snails? Do you understand that you must have a permit to import snails? Do you understand that any and all snails you might be carrying must be declared?"

Eventually she dumped all the stuff out of my day pack, and briefly held the white plastic bottle in which my specimens for scientific research were preserved. But she didn't think to open the top and look inside. "Are you certain that you are not carrying any snails?" she inquired again. And again I insisted that no snails were in my possession. That's my story, and I'm sticking to it.

My entire detention didn't take much more than ten or fifteen minutes, after which I was released on my own recognizance, irritated (and perhaps a bit humiliated) but otherwise unscathed. And puzzling, as I dragged my recognizance through the airport to my connecting flight, as to how the Feds might so accurately have profiled me, without any overt clues, as a Person of Malacological Interest.

Some of my readership may remember the essay I published on 17Dec08 entitled, "Non-pests, Non-plants, and Non-sense at the USDA" (1). In that essay I described a series of misadventures and hijinks attending my efforts to obtain a USDA permit for the importation of living European planorbid gastropods into the United States. The process was painful and took several months to bear fruit, but ultimately I was granted a "letter of no jurisdiction" by the USDA to facilitate that particular shipment of snails. In retrospect, I feel fairly certain that this honest effort at good-faith citizenship in 2008 may have led to my detention in Atlanta last month. And am I to suffer this same indignity every time I apply to re-enter my own country for the rest of my life?

I like to think of the proper relationship between Science and The State as one of dialogue (2). As a scientist, I understand that my language, culture, and values are different from those of US Customs and Border Protection, US Immigration & Customs Enforcement, and our various federal agencies concerned with agriculture, public health, and natural resources. Nevertheless, a couple years ago I coauthored a paper with USDA colleagues on mollusks of quarantine importance in the United States (3). And just last week the US Fish & Wildlife agent on duty here in Charleston contacted me (yet again) to confirm the identity of some molluscan contraband she'd interdicted at the port (4). I get requests of this sort all the time, and I always try to help.

So why would you Gubmint Bozos go out of your way to piss me off? It seems to me that, of all 300 million citizens in this great country of ours, the one guy whose good word you should believe, if he checked NO on the snails box of his customs declaration, would be Dr. Robert T. Dillon, Jr. I'll bet I'm the only professional malacologist in the history of USDA-APHIS form PPQ-526 who has ever endured the hassle of importing live snails properly. And for my honest efforts, you send some officious woman to rifle through my dirty underwear in Atlanta International Airport? Well, it'll be a long time before this "dialogue" opens up again.

(2) Hit the "Science and Public Policy" label above and to the right to review a series of posts on this recurring theme.

Hippopus hippopus back on April 12. I had one of those photos posted below, but she asked me to remove it (without explanation) on May 19.

(5) Note added November, 2011. In subsequent correspondence with other colleagues, I have discovered that there are (almost) no reliable photos of Physa (or Aplexa, or Stenophysa) marmorata available anywhere on the web. If you google images for marmorata, you will obtain pages and pages of photos of trash Physa acuta. So here, as a service to the community at large, is a photo of a bona fide Physa (Stenophysa) marmorata individual (13.5 mm) from Ojojona, Honduras.
Posted by Rob Dillon at 11:01 AM 6 comments: