Just Before The Bust

Editor’s Note – This essay was subsequently published as: Dillon, R.T., Jr. (2019d)  Just Before The Bust.  Pp 55 - 61 in The Freshwater Gastropods of North America Volume 4, Essays on Ecology and Biogeography.  FWGNA Press, Charleston.


The fall line as it arcs through the midlands of South Carolina is a rather indistinct region of broad shoals and rocky flats, featuring no actual falls, constituting no real line.  The Catawba River enters this region at Great Falls, SC, and, finding nothing especially remarkable, much less great, traces a lazy path about 25 miles south to the vicinity of Camden, changing its name to the Wateree River somewhere along the journey, possibly out of boredom.  Prior to the 20th century, I feel certain that this section of the river presented at least occasional rocky shoals and rapids.  But it was on the last shoal of the Catawba/Wateree, perhaps 6-8 miles north of Camden, that Duke Power built a hydroelectric dam in 1920.

Undistinguished by its 225 foot height, but stretching a longish 3,380 ft. across the wide river channel and associated flood plain, the Wateree Dam and Hydro Station has a 56 megawatt capacity, typically generating a daily 3-5 foot cycle at the gauge in its tailwaters during the warm months.  Its 13,864 acre reservoir also sees substantial recreational use, Duke Power having thoughtfully provided boat ramps and fisherman’s accesses throughout. 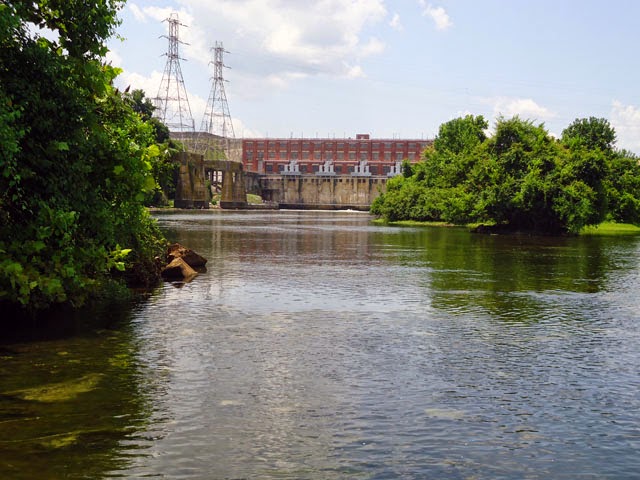 Invasive populations of Bellamya (or Cipangopaludina) japonica have been established in South Carolina since at least 1995 [1].  And indeed, my good friend Bill Poly of the SCDNR alerted me to the introduction of a Bellamya population in the Wateree Dam tailwaters back in June of 2011.  So I was not surprised by the email I received last month from another of my good friends among the ranks of state aquatic biologists, David Eargle of SCDHEC.  But the way he described the gastropod situation downstream from the Wateree Dam piqued my curiosity.  David reported “Unbelievable numbers of Bellamya.  One area I thought at first was a gravel bar was all snails.  Amazing.”

So I picked out a nice Saturday late last month, loaded my kayak into the back of my pickup, and headed up the interstate northwest about 2.5 hours from Charleston to the tailwaters of the Wateree Dam.  And indeed, the adjective “amazing” describes the situation quite well.

The fisherman’s access is on the right (descending) bank of the river.  I launched my kayak and paddled maybe 20 - 30 yards across the main channel about mid-day, to the broad and (in spots) marshy region, dissected by rocky pools and shoals, that extends across the left 90% of the riverbed.  The photo below was snapped in that left-side rocky/marshy region looking downstream.  The photo at the top of this essay was snapped from the same vantage point, looking upstream. 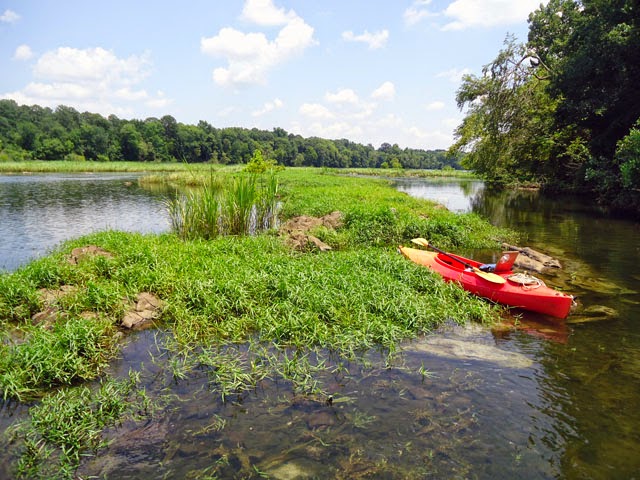 So the third photo in this series is a typical vista looking across one of those rocky pools downstream from the Wateree Dam.  The water levels had been dropping steadily all afternoon on this particular Saturday, reaching an extreme low around 4:30 PM, at which time the horn sounded and the hydro station began to generate.  The photo below was taken around 4:00 PM.

And the next photo was snapped looking directly down through about a foot of clear water, showing that the bottom of a typical channel is essentially a “bed” of gastropods, piled on top of each other, perhaps three or four snails deep.   If you click on the image below you can download a high-resolution (4.5 mb) jpeg, zoom in,  and see that the snails are not grazing.  They are lying on their backs on the bottom of the Wateree River, apparently filter feeding like a bed of mussels. 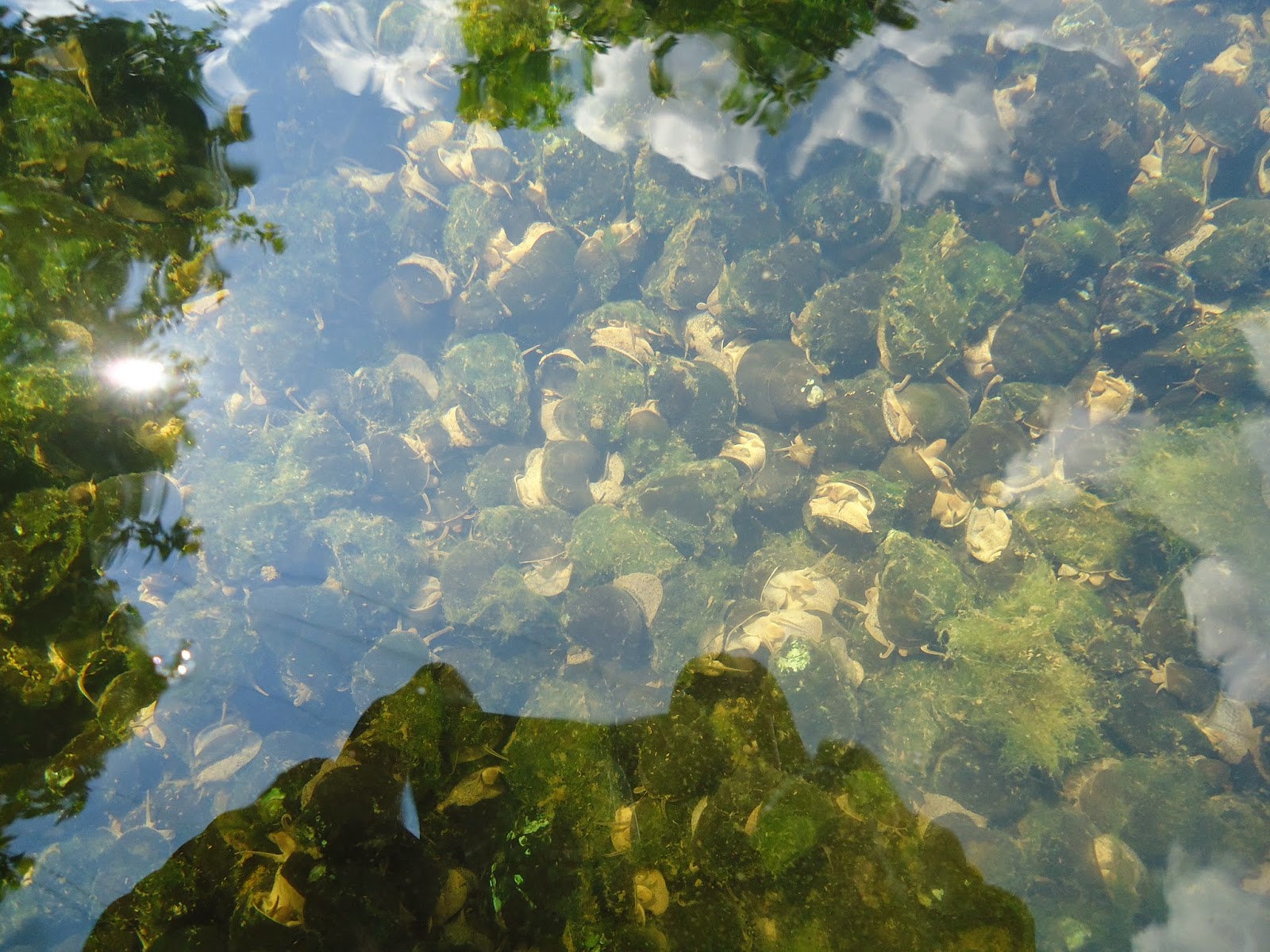 The ability to filter-feed is fairly well-documented in viviparids [2].  In fact, if you shop in one of those nurseries that specialize in backyard water-gardens, the salesmen will often advise you to purchase “Japanese Mystery Snails” for $1.00 each (or $10 per dozen) to help “clarify” the water in your ornamental lily pond.  Which I think they probably do.

Notice in this next photo that the snails in my net seem to be strikingly uniform in size, all approximately 30 – 40 mm in standard shell length.  It was my impression that the population was comprised almost entirely of the one-year-old age class, probably born in the spring and summer of 2013.  I noticed a few young-of-the-year juveniles the afternoon of my visit, all in the 10 mm size range, and just a couple 60 mm “lunkers,” which must have been 2+ years old.  But overall, the size distribution of the snail population struck me as unusually homogeneous.

So the tide hit dead low at about 4:30 PM, and I started back through the rocky marsh, more dragging my kayak than paddling it.  And I happened to wade through one warm pool with a slightly muddy bottom, apparently not receiving as much current as some of the others.  And when I turned back to look in my wake, this is what I saw: 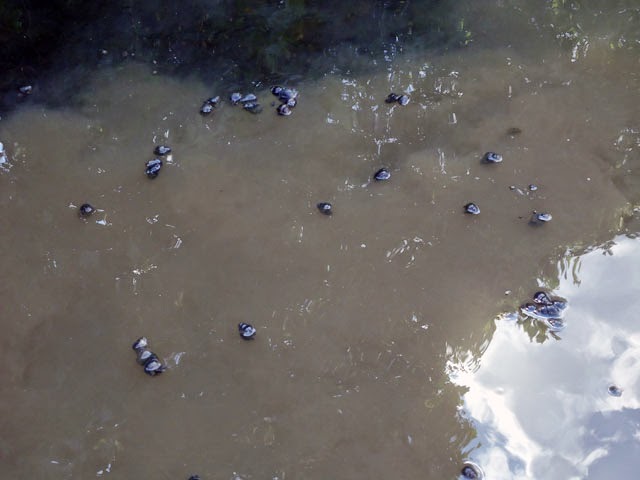 These are empty shells, of course.  The snail has died and rotted, and the empty shell filled with gas.  I must have kicked up several hundred such “floaters” as I walked back to the channel.

It seems likely to me that the Bellamya population downstream from the Wateree Dam is on the verge of a bust.  Dramatic die-offs of invasive viviparid populations are not uncommon in the southeastern United States [3], occasionally even reaching the attention of the popular press.  I got telephone calls about a stinking Bellamya die-off in Lake Murray on the other side of Columbia a couple years ago, and there was a huge mess on the Neabsco River up in Virginia in 2010, necessitating the deployment of heavy equipment.  But in all cases of my personal experience, the phenomenon is discovered after the crash.  Last month’s observations were the first I have ever personally made during the population flush phase.

The population age distribution was especially interesting to me.  So I loaded my kayak back in my pickup and drove around the fisherman’s access roads to Lake Wateree just above the dam, maybe 300 yards upstream from where I had spent most of the afternoon.  The size distribution of the Bellamya population in the shallows of the reservoir seemed dominated by big lunkers 50-60 mm in shell length, which is normal year-round in the Carolinas, in my experience.  Typically very few animals aged one year and younger will be apparent upon a causal census of a Bellamya population around here.  I took this as evidence that the Bellamya population downstream from the Wateree Dam had reproduced explosively in the last year or so.

“Boom-and-bust” or “flush-crash” population dynamics are a familiar aspect of invasive species biology.  But it is my impression, after a couple hours of poking around the published literature, that about 95% of everything we know is anecdotal [4].  Danielle Haak and her colleagues [5] suggested that a 17-39% die-off of the adult Bellamya population in a Nebraska reservoir was due to “an extreme drought event, which was coincident with abnormally hot weather.”  Moore and colleagues [6] documented the community effects of a Potamopyrgus boom-and-bust cycle in California, reviewing the three most obvious hypotheses to account for the bust (weather, intraspecific competition and predators/pathogens), but not ultimately selecting a favorite [7].

Simberloff and Gibbons [8] conducted an “exhaustive” review of the worldwide literature on population crashes of established introduced species, together with systematic “queries to experts on invasives by particular taxa.”  They observed:

Across the N=17 case studies Simberloff considered the best-documented, four of the putative causes were “competition with other introduced species,” with one case each for “parasitism by subsequently introduced species,” “adaptation by native herbivore,” and “exhaustion of resource.”  And for ten of the 17 best-documented invasive species population busts [9], “there is no strong evidence suggesting a cause.”

One would think, with all the dump trucks full of money being spent to study the causes and consequences of biological invasions worldwide – all the weeds, all the bugs, and all the slugs combined – at least a little funding would be available to study why this problem, at least occasionally, solves itself.  Or am I wrong, again?

[1] This is the fifth post I have authored in the last ten years on Bellamya invasion.  If you’re interested in digging into the phenomenon, perhaps the best approach would be to first go to the FWGNA pages on Bellamya japonica and the closely-related Bellamya chinensis, read the general biology, and then follow the links from the “Essays” sections at the bottom of those two species pages back to this blog.   So start here:

[4] The irony that I myself am adding yet another anecdotal report here does not escape me.

[7] Have there been similar (local) crashes of Potamopyrgus populations throughout the American West?  This was the impression that I took from the Snake River below Minidoka Dam in 2010, mentioned in footnote #4 here: