Editor’s Notes – This is the fourth in a series of essays about the aerial dispersal of freshwater gastropods.  But no, you do not have to read the other three, which are entirely independent of this one.  My previous essays were posted 15Dec16, 11Jan17, and 24Apr17, if you’re curious [1].  But that material won’t be on the test.

So back in April of 2015 I received an intriguing email from our good friend Nora Foster, way up in Fairbanks, Alaska.  She wrote:

"A colleague of mine has just brought me a whole sh-- load of tree swallow nests. It seems that the little birds select pond snails, presumably for food, there's some indication that it's a response to low calcium availability. I've only found one paper on this [2].  I wonder if you know of any other work done on freshwater snails being consumed by small birds. The shells are intact, by the way, I'm not sure if the swallows are spitting out the shells, or just what's going on."

My quick answer was no, that I was not aware of any other work on the consumption of freshwater snails by small birds.  Stacks of papers have been published about ducks and other waterfowl, of course.  We’ve reviewed some of that work in recent months.  And there’s the Everglades kite, which is a raptor, feeding on Pomacea.  But no, Nora’s email of 4/15 was the first report I had ever heard that little dicky-birds might eat freshwater snails.

So Nora and I struck up a correspondence that extended a couple weeks.  Nora found one reference suggesting that momma swallows may bring freshwater snails back to their hatchlings and regurgitate them as food provisions [3].  Perhaps the empty shells we subsequently find in swallow nests were food offerings rejected by the hatchlings, or lost?  Not swallowed?  Sorry, I couldn't resist.

In a sense this phenomenon would seem to be the complement of the situation we reviewed in December and April.  Waterfowl are very likely to ingest freshwater snails, but the snails are very unlikely to survive.  Passerine birds are certainly much less likely to ingest freshwater snails, but the likelihood of snail survival may be much greater.  Perhaps the products of the two sets of probabilities are comparable?

Now imagine a shot of a calendar flipping 17 pages.  This past September I was pleased to receive a cordial email from our good friend Bob Prezant, introducing me to Dr. T. J. Zenzal of the Migratory Bird Research Group at the University of Southern Mississippi.  Dr. Zenzal had a photo, a question, and an interesting story to tell.

Each spring migratory birds arrive on the southern Louisiana coast after long and perilous flights across the Gulf of Mexico [4].  Dr. Zenzal has worked many migration seasons and has captured (he estimates) over 20,000 birds.  Several years ago, while he was a graduate student, one of his labmates made the remarkable collection figured below from the body of an indigo bunting.

I responded to Bob and TJ that I was “about 80% sure” those snails are Lymnaea cubensis, with “maybe a 5% chance” that they could be fat, squat Lymnaea humilis.  (I’d have to count the cusps on their first marginal to rule out the humilis hypothesis.)  I also left 15% chance that those little snails might be referable to some Central or South American taxon, like viator/viatrix, neotropica, or cousini, and that any of those nominal species from South America really is specifically distinct from cubensis.  I confessed that I have zero experience with any element of the South or Central American fauna, however, and concluded with my (gratuitous) impressions that the South American lymnaeids are terribly oversplit, and that our understanding seems to be worsening with each new research paper published on the subject [5]. 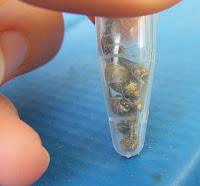 But the most interesting question (by far!) is not what those snails are, but how the heck did those snails get there?  Looks like 8-9 snails, from the photo.  Buried in the breast feathers, according to TJ’s note currently in press [6].  My mind was first called back to my 2015 correspondence with Nora Foster.  Apparently passerine birds do, at least sometimes, eat snails.  Possibly as a calcium provision?

And I also recalled W. J. Rees’ charming “presidential address” of 1965, on the aerial dispersal of the Mollusca [7].  Rees retold a story from one “Prof. G. E. Beyer” regarding upland plovers:

“When the birds arrive in Louisiana, they invariably carry ten to thirty snails under their wings.”  “The occurrence was so regular and confirmed so often after many years, that I expected the habit to be generally known.”

Prof. Beyer hypothesized that plovers deliberately carried snails under their wings as food provisions.  But the plover is a ground-nesting bird, and so (I suppose) a skeptic might suggest an alternative hypothesis that all those snails had climbed into all those plover arm pits accidentally, if they were nesting, which I don’t suppose they probably were.

But an indigo bunting?  A male, by the way, who wouldn’t need augmented calcium supplies, who wouldn’t be feeding hatchlings?  Does that sound like a food provision?  I suggested this idea to TJ, and he replied, quite reasonably:

“The Indigo Bunting is primarily a seed eater, however birds can show flexible foraging during migration - leaving it possible for this species to eat snails.  However, I am not sure the bird would willingly carry snails just to consume them later - especially if the bird made a trans-Gulf flight.”

Fair enough.  So for now, at least, I myself have filed the remarkable observation of eight Lymnaea hitchhiking on an indigo bunting breast in my very large folder labelled, “queerer than we can suppose.”

I’m not sure if it’s a blessing or a curse, but the attentions of practicing biologists are often called to “one-of” phenomena.  While such phenomena do not lend themselves to scientific inquiry, they often register extremely high values on the importance-meter.  The origin of life was such a one-of phenomenon.  And so are we all.

[3]  I can’t open this link, but for the record:
http://umbs.lsa.umich.edu/research/bibliography/fresh-water-mollusks-fed-to-young-tree-swallows.htm

[4] Many songbirds most certainly do make the 1,000 km crossing directly over the Gulf of Mexico.  But some apparently go around.  The possibility that any particular bird might have circumnavigated the Gulf, rather than crossing it, cannot be ruled out.