Editor's Note. Word has reached us of the death of Dr. George Ang Te, who passed away late last year in New Hamburg, NY at the age of 67.  Although I never met him, George Te’s 1970s-era research on the worldwide Physidae was a significant influence on my professional career.  In this final installment of our three-part series, we examine Te’s 1978 dissertation, and his continuing legacy.  Subsequently published as: Dillon, R.T., Jr. (2019b) To identify a Physa, 1978.  Pp 181-188 in Freshwater Gastropods of North America Volume 2, Essays on the Pulmonates.  FWGNA Press, Charleston.

In the 1970s everybody was in love with computers.  There was just the one computer on the Virginia Tech campus, and it was a huge IBM 360/370, with walls of blinking lights and massive tape drives.  And if you wanted to use it, you pretty much had to write the FORTRAN code yourself.  There were a few “canned” statistical packages available in those days, but even to use canned programs, you had to write your own job control language.  And you had to punch your own cards, in a big room full of keypunch machines – one line of code or data per card.  And you needed an “account” to use the machine.  (Tech undergraduates were allocated $25 per quarter.)  And you left your deck of cards at the input desk, and came back the next day, hoping to find a thick stack of tractor-feed paper with meaningful results in your cubby.  I usually found two-page bombs, with unintelligible error codes, and hefty charges to my account for the service.  I loved computers in the 1970s.

In the 1970s the world of systematic biology was completely consumed by warfare between the forces of phenetics and the forces of cladistics.  Phenetic analysis was seamlessly able to bring the power of electronic computing to bear on problems of classification.  Pheneticists told us to count, measure or score 100 characters on 100 “operational taxonomic units,” punch our cards, and let the room full of blinking machinery objectively classify our OTUs by their overall similarity.

No, cladists argued – classification can only be based on shared-derived characters, and shared-primitive characters must be discounted.  So rather than calculate some gross measure of overall similarity among our OTUs, cladists insisted that character state polarity must be taken into account.  For everything measured, counted or scored, somebody had to figure out what state was primitive, and what state was derived, somehow.   Such subjectivity did not immediately lend itself to electronic computing. 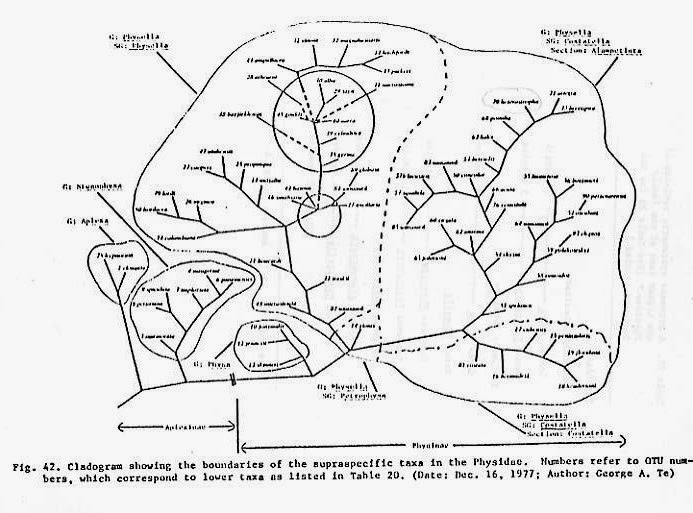 But whatever else the world of systematic biology was focused upon in the 1970s, organisms were not it.  The process of classification was important, and the OTUs being classified, not so much.  And it was into this world that George Te stepped when he entered the PhD program at the University of Michigan in the fall of 1971.

So in addition to J. B. Burch, serving on George Te’s PhD committee were two much-decorated officers in the cladist army, Warren (“Herb”) Wagner and George Estabrook.  Wagner was an exellent botanist, carried to stardom by an algorithm to estimate phylogenetic relationships that became known as “Wagner parsimony.”  Estabrook was a computer scientist, entirely unsullied by any taint of organismal biology, with a head full of very original ideas for estimating cladistic classifications based on character compatibility.  And I think it was primarily Estabrook’s influence that ultimately turned George Te’s dissertation focus, and indeed George Te himself, away from biology.

But he made a promising start at it.  Last month [1] we reviewed Te’s (1975) survey of the Physidae of Michigan, which I characterized as “the zenith of classical malacology in North America.”  So broadening his scope toward a dissertation, Te expanded his regional survey to include 12,163 museum lots of worldwide physids from seven major museums, among which he initially recognized 85 “basic taxa.”  For these 85 basic taxa he scored 71 characters: 37 of shell and 34 of anatomy, each character taking some number of discrete “states” [2].

Estabrook gave George Te two sets of computer programs, one phenetic and the other cladistic.  The former was called “Simgra,” a quirky method of clustering OTUs by a matrix of similarity coefficients.  The latter was a two-part affair, Estabrook’s test for character compatibilities followed by a J. S. Farris routine to extract “cliques.”

The meat of Te’s dissertation was what can only be characterized as methodological gear-grinding, the details of which simply do not matter today.  But what ultimately popped out of the roomful of blinking machinery was a reduced set of 48 “species units,” in five groups with two outliers.   See George Te’s Figure 42, scanned above.

Throughout this retrospective I have tried to refrain, as much as humanly possible, from judging George Te by 21st century standards.  But I ordered a copy of his dissertation from University Microfilms in 1982, and my contemporary impressions of the work were profoundly mixed.

Te’s dissertation did include at least one significant advance – the description of a fifth type of penial morphology, which he called “type-bc, indicating its intermediate nature.”   This was the basis of his physid “Group V – the cubensis group.”  He misclassified most of the species in the group, including cubensis.  But his characterization of this intermediate-but-nonetheless-distinct morphology provided a critical clue to Amy Wethington and me as we began our work on the specific relationships among southeastern physids 20 years later [3].

It was extremely frustrating to me in 1982 that, although George Te explicitly stated that his observations quoted above were based on 33 nominal acuta specimens, 13 concolor, 24 virgata, 19 osculans, 29 pomilia, 28 integra, and so forth, he did not tell us where any of his samples came from, and so we who followed him could not verify his observations for ourselves.  With the benefit of 30 years’ hindsight, we now understand that acuta, heterostropha, virgata [7] and integra are conspecific.  We do not know about osculans or concolor [8].   But we do know that pomilia is a distinct species [9], correctly classified in Group V, not Group IV, and the inescapable conclusion must be that none of the 29 individual snails Te examined came from a bona fide pomilia population.

But returning to contemporary times, my bottom line impression of George Te’s 1978 dissertation was one of disappointment.  It could not be used to identify a Physa.  Which is all I ever really wanted it to do. 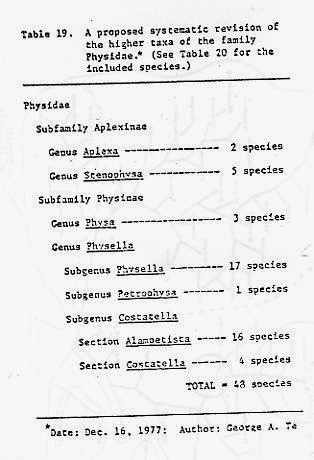 And can 48 meaningless OTUs be classified in some meaningful way?  Te proposed a system of two subfamilies, four genera, three subgenera, and two “sections,” which yielded the seven baskets he needed for his 48 “species units.”

But by the date of his defense, in December of 1978, it seems clear to me that George Te’s interests had strayed afield from systematic biology, and toward computer science.  Of the 324 pages comprising his dissertation, over 35% were devoted to analytical arcana.  His section on phenetic relationships, for example, was 54 pages of “Simgra” results, showing dozens of “linkage diagrams” at various “similarity levels.”  The roomful of blinking, spinning machinery was beginning to carry George Te away.

His dissertation [10] was never published.  All that ultimately emerged was a six page paper in Archiv fur Molluskenkunde, entitled “New classification system for the family Physidae” [11].  By the 1979 date of that publication, George Te was giving his address as University of Michigan Department of Computer Science.

But to his tiny, obscure 1979 paper must (in all fairness) be added the entire treatment of the Physidae in J. B. Burch’s immensely influential “North American Freshwater Snails,” which first appeared as an EPA publication in 1982.  George Te’s dissertation results became the de facto standard for the classification of the Physidae in the United States, right up in the pantheon beside Baker’s Lymnaeidae, Basch’s Ancylidae, and Goodrich’s Pleuroceridae.  And that quirky physid classification, for all its faults and failings, was the only system adopted by Burch that was, in any sense, objective.

I never met George Te.  But he was, by all accounts, a very nice man.  And he was extremely helpful to me at an early stage of my career.  In a span of just eight years, from 1971 – 1978, he was able to bring order out of taxonomic chaos in one of the most important elements of the North American freshwater benthic fauna.  He advanced our science.  Rest in peace.

[2] If this essay were really about George Te’s classification, we’d stop right here.  Only 14 of his 71 characters were legitimately discrete, and his character scoring system was a nightmare, and his entire analysis a house of cards.  But in 2014 it just doesn’t matter.

[3] Wethington, A.R., J. Wise, and R. T. Dillon (2009) Genetic and morphological characterization of the Physidae of South Carolina (Pulmonata: Basommatophora), with description of a new species.  The Nautilus 123: 282-292.  [PDF]
[4] George Te was very, very close to making a breakthrough here.  He wrote:

It was not until 2002 that we finally confirmed heterostropha to be conspecific with acuta [5].  Te was a good, conscientious worker, and his observations have substantial scientific value, in direct contrast to some of his contemporaries, who just made stuff up [6].

Posted by Rob Dillon at 4:57 PM No comments: