Editor’s Note – This is the third essay in my series on the phenomenon of double digit intrapopulation mtDNA sequence variation, which I have begun calling “mitochondrial superheterogeneity.”  The points I plan to advance here will depend upon my crazy “wildebison” model of 6Apr16, which (in turn) depended on the field observations I reviewed in my essay of 15Mar16.

This essay was subsequently published as: Dillon, R.T., Jr. (2019c) Mitochondrial superheterogeneity and speciation.  Pp 163 - 170 in The Freshwater Gastropods of North America Volume 3, Essays on the Prosobranchs.  FWGNA Press, Charleston.

Understood in their proper context, typical mtDNA sequence data sets yield weak, null models of population relationship, not directly relevant to the question of speciation [1], but certainly correlative.  A mitochondrial gene sequence is a perfectly fine single character.  Given a decent sample size per population, typical mtDNA sequence data can reasonably be used to estimate interpopulation genetic divergence, which (especially in combination with data from other sources) is generally correlated with the likelihood of speciation [2].

So in the last couple months we have focused on the mtDNA sequence data collected by Whelan & Strong from five populations of Leptoxis “ampla” inhabiting tributaries of the Cahaba River, draining south through Alabama into the Mobile Bay [3].  Whelan & Strong also sampled n = 20 Leptoxis praerosa from a tributary of the Tennessee River, draining west across the top of Alabama toward the Mississippi River.  Their data set included many striking examples of mitochondrial superheterogeneity.  So while intriguing as an evolutionary phenomenon, doesn’t the occurrence of up to 20% sequence divergence within conspecific populations of “ampla” compromise the utility of mtDNA as a tool for distinguishing “ampla” from praerosa?

No, perhaps just the opposite.  But before I develop that surprising point, let’s back up a few years and review what we actually know about the evolutionary biology of Leptoxis populations in Alabama.

The Leptoxis fauna of the Mobile Basin was last comprehensively monographed by Calvin Goodrich in 1922 [4], prior to his 1934 - 1941 awakening to the Modern Synthesis [5].  The entire pleurocerid fauna of Alabama was then decimated by a massive program of impoundment and channelization, leaving behind what may be the single biggest taxonomic mess anywhere in North American malacology [6].

In 1998, Chuck Lydeard and I published a survey of genetic variation at 9 allozyme-encoding loci in eight populations representing all four nominal species of Leptoxis known (at that time) to persist in the Mobile Basin of Alabama [7], calibrated with three populations of the widespread and well-studied Leptoxis praerosa of Tennessee.  Our Alabama populations included three identified as Leptoxis ampla from the Cahaba drainage [8], two populations identified as L. taeniata from tributaries of the Coosa River, and one population of Leptoxis picta from the main Alabama River way downstream in Monroe County [9].  The allozyme variation among those six populations was comparable to that observed among our three control populations of Leptoxis praerosa, and negligible compared to the genetic divergence between praerosa and the ampla+taeniata+picta group combined.  Thus our (9 gene, 11 population, 333 individual) results suggested that Leptoxis ampla (Anthony 1855) is a junior synonym of L. picta (Conrad 1834) [10].

So returning to the mtDNA sequence data of Whelan & Strong.  It is reassuring to note that, despite the high incidence of superheterogeneity W&S observed scattered among the five Cahaba drainage pleurocerid populations of (what should better be referred to as) Leptoxis picta, their 16S+CO1 gene tree nevertheless depicted the single population of Leptoxis praerosa they sampled from that Tennessee tributary as genetically distinct.

The bottom half [11] of Whelan & Strong’s Figure 2 (reproduced above) shows negligible sequence divergence within their 20-individual sample of L. praerosa, but approximately 13% divergence between modal ("clade 9") L. praerosa and modal (“clade 15”) L. picta [12].  Granted, the sequence variance within populations of L. picta (“ampla”) does indeed range well above 13%.  But a mode-to-mode difference of such magnitude is certainly consistent with an hypothesis of speciation.

And we have thus far given short shrift to the histone H3 sequence data adduced by Whelan & Strong, which is especially interesting because the gene is nuclear, and tends to evolve quite slowly.  Figure 3 of W&S (reproduced below) shows essentially zero sequence divergence within or among any of the five L. picta (“ampla”) populations, but 2.0% divergence between picta and praerosa [13]. 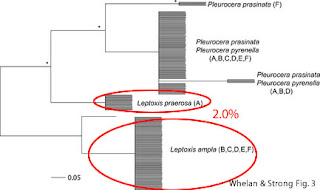 Levels of genetic divergence in allopatry, no matter how striking, do not directly address the question reproductive isolation, and hence can only constitute indirect evidence of speciation.  But the nine allozyme-encoding genes of Dillon & Lydeard, plus the 13% mode-to-mode sequence divergence W&S report for the CO1 gene, plus the 2.0% sequence difference at histone H3, taken together with whatever morphological evidence may have accumulated [14], certainly combine to suggest that the specific distinction between L. picta (aka “ampla”) and L. praerosa is indeed a valid one.

Now begging your indulgence, let me return to Figure 4 of Whelan & Strong – the third time I have reproduced the figure below in three months.  And let’s focus once again on the situation at red-star-14 in the lower left corner, showing that the Shades Creek Leptoxis sample included 16 copies of the modal haplotype and 1 copy of a 12% divergent haplotype, modal in the Cahaba River at US52.  (The red-star numbers in Fig 4 below correspond to the clade numbers in Fig 2 above.)  Last month I suggested that cases of mitochondrial superheterogeneity such as this are the signatures of very rare dispersal events, as though a wildebeest were airlifted into a herd of bison, and successfully interbred.  Seen in this light, the results depicted at red-star-14 constitute direct, positive evidence that the Leptoxis population of Shades Creek is conspecific with the Leptoxis population of Cahaba-US52. 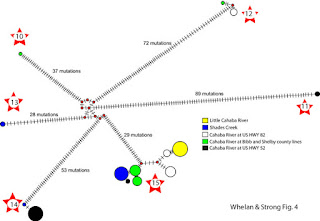 And similarly at red-star-12.  Here we see that the Leptoxis populations of Cahaba-Bibb/Shelby and Cahaba-US82 share a unique, rare CO1 haplotype that Whelan & Strong didn’t discover modally anywhere.  This would seem to constitute direct, positive evidence that the Bibb/Shelby and the US82 Leptoxis populations are conspecific both with some third (unsampled) population where that particular haplotype is much more common, and with each other, as well.

So more broadly, I would suggest that rare, superdivergent mtDNA haplotypes be understood as markers of genetic compatibility with second populations some distance removed.  And at red stars 10, 11, and 13, we see three additional markers of genetic compatibility with three other populations of Leptoxis that Whelan & Strong did not sample.  All of these populations must be conspecific – the populations of Leptoxis picta in which W&S found the markers, and the four other populations elsewhere.  In an ideal world, given complete sampling, it seems possible to me that the phenomenon of mitochondrial superheterogeneity might afford a direct, positive tool to reconstruct specific relationships among extensive sets of highly allopatric populations in their entirety.

Well, perhaps you’d like to join us back here in the real world, Dillon?  The pleurocerid fauna of real Alabama is just a ghost of its former self.  And the Leptoxis populations where the sequences shown at red stars 10, 11, 12 and 13 are modal may well have been extinguished 80 years ago.  Or longer?  And those mtDNA haplotypes might be genetic fossils, of populations long gone to glory?  Interesting to think about.

But turning the page.  As I am sure most of my readership will have by now noticed, the mtDNA survey of Whelan & Strong extended to cover six populations of Pleurocera, sampled alongside the six populations of Leptoxis upon which we have focused these last three months.  Their Pleurocera results offer some striking contrasts with their Leptoxis results, one of which is illustrated in the copy of their Figure 3 I have reproduced above.  Why doesn’t the population W&S identified as “Pleurocera pyrenella” from the Tennessee drainage appear genetically distinct from the five populations they identified as “Pleurocera prasinata” from the Mobile Basin?  Tune in next time!

[5] Goodrich’s (1934 – 1941) “Studies of the Gastropod Family Pleuroceridae” series may represent the earliest application of the modern evolutionary synthesis to malacology – I don’t know of any earlier.  For more, see my essays:
[6]  But we can’t blame the entire mess on Alabama Power Company and the Corps of Engineers.  As was true throughout The South, the state of Alabama was blanketed with cotton and other row crop agriculture through the nineteenth century and well into the twentieth.  Bank-to-bank farming dumped tremendous loads of silt into the smaller rivers and streams, which still chokes most of the pleurocerid habitat, even to this day.

[8] One of the three Leptoxis ampla sites of Dillon & Lydeard matched one of the five Whelan & Strong sites precisely – the Cahaba River at HWY 52 bridge.

[9] We also included two populations of Leptoxis plicata from the Black Warrior drainage, not relevant to this particular essay.  We did not include the subsequently rediscovered Leptoxis “foremani/downiei” or Leptoxis “compacta.”

[10]  Our good friends Nathan Whelan and Ellen Strong neglected to cite Dillon & Lydeard (1998) in their more recent work on the Alabama Leptoxis under review here.  I’m sure this was just a simple oversight.

[11] The upper half of Whelan & Strong’s Figure 2 depicted the 16S+CO1 genetic relationships among their six populations of Pleurocera.  We’ll return to those data next month.

[14]  Whelan & Strong did not offer any morphological observations on L. praerosa.  But it is my subjective impression that there may be subtle differences in the whorl shape or spire height between praerosa and picta (“ampla”) – perhaps noticeable only in juveniles, or in adults inhabiting calmer, more protected waters [15].