Toward the Scientific Ranking of Conservation Status - Part II

Note: This essay was subsequently published as FWGNA Circular No. 1 (19Mar12).

Since the birth of their discipline, community ecologists have been interested in a phenomenon generally called “the distribution of commonness and rarity.” If one surveys bird abundance on a set of Pacific Islands, for example, certain patterns (e.g., all bird species equally common) do not seem to occur. Rather, what one typically finds is that a few species seem to be very common, and many species seem to be very rare. Such observations led to the development of several prominent theoretical models to explain the distribution of commonness and rarity, each based on slightly different assumptions about the processes that might be ordering biological communities. The best review of this literature I know is the 1975 work of Robert May [1].

Although (as far as I am aware) the lognormal model has not been extended beyond community ecology, it seems plausible to me that such “minimal structure” might generalize to evolutionary time, and find application to the regional (or even continental) distributions of related organisms no longer competing, or indeed even interacting, in any way. 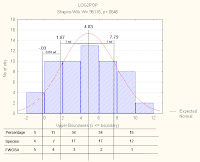 For example, across the southern Atlantic drainages the FWGNA project has recorded 593 populations of Helisoma anceps and 192 populations of Helisoma trivolvis. But because H. trivolvis is adapted to lentic environments and H. anceps to lotic, they rarely occur together. The same relationship exists between Gyraulus parvus and Menetus dilatatus, and between Amnicola limosa and Somatogyrus virginicus, and in several other pairs and groups. This sort of “minimal structure,” integrated over the evolutionary history of the freshwater Gastropoda, might plausibly lead to a lognormal distribution of commonness and rarity at a scale much larger than the single biological community.

From the Atlantic drainages of the four southeastern states, the FWGNA Project has recorded the 57 species of freshwater gastropods ranked down the left margin of Table 1 [4] by the total number of lines in our database [5]. The most common species across the region was (somewhat surprisingly) Campeloma decisum with 1,188 records, followed by Physa acuta with 1,082 records, and so forth, down to four species (Gyraulus deflectus, Valvata tricarinata, Fontigens bottimeri and Marstonia gaddisorum) with one record each.

Because data of this sort are typically found to contain many singleton values, the convention in community ecology has been to use base-2 log transformation. Thus log2 abundances for all 57 species are given in Table 1 and plotted in Figure 1, to the left above [Note 6, click for larger].

A lognormal hypothesis does indeed fit the distribution of commonness and rarity of the 57 freshwater gastropod species of southern Atlantic drainages (Shapiro-Wilk W=0.962, p<0.065). The mean of the distribution shown in Figure 1 is 4.83 (= 28.4 records), with a standard deviation of 2.96 (= 7.8 records).

Figure 1 shows that the 57 freshwater gastropod species of southern Atlantic drainages include just the 4 singletons at Rank-5, an additional 7 species at Rank-4, 17 at Rank-3, 17 at Rank-2, and 12 species at Rank-1. The conservation ranks of all 57 species are given in the far right column of Table 1.

The implications of adopting such a system to guide conservation decisions more generally, in other groups of organisms elsewhere, would bear considerable discussion. Perhaps we will devote a third essay to this question in some future month. For now I will close with this.

It will be obvious to any of my readership with a general appreciation of the North American freshwater gastropod fauna that two of the four species here designated as “Rank-5” are narrowly endemic and genuinely rare (the two hydrobiids) and that two of the four species (Gyraulus deflectus and Valvata tricarinata) would have become much more common had our survey been extended further north. Clearly, the ranks we have assigned in the present exercise are dependent on the region surveyed. Thus we propose to call this set of 57 “FWGSA” ranks – Freshwater Gastropods of the Southern Atlantic drainages [8].
And more generally, the stability of any ranking system based on abundance data will be a function of the area surveyed – the smaller the area, the more unstable the classification. So although the regulatory apparatus for conservation purposes (and grant funding!) is largely administered by the states, we have resisted the temptation of calculating state-level abundance ranks here. Rather, we anticipate expanding our area of coverage, ultimately to include the entire continent, at which point we will publish FWGNA ranks, perhaps characterized by some stability.

But in any case, the system described above is rigorous, objective, and theoretically-based. In short, it is a scientific method to assign conservation status ranks, heaven help us.

[1] Although I dabbled in community ecology early in my career, I admit I have not kept up with the literature. There is probably something more current than this:
May, R. M. (1975) Patterns of species abundance and diversity. Pp. 81 – 120 in Ecology and Evolution of Communities (M. Cody and J. Diamond, eds). Cambridge, MA: Belknap Press.

[4] Table 1. The 57 species of freshwater gastropods inhabiting the southern Atlantic drainages of the United States, ranked by their abundances in the FWGNA database 1/2012. [pdf]

[5] Each line in the FWGNA database records the collection of a single species at a discrete site. We have screened any date-duplicates from the databases we have obtained from secondary sources, including museums and state natural resource agencies, as well as any nearly-neighboring collections, such as those taken upstream and downstream of single bridges.

[7] Toward the Scientific Ranking of Conservation Status – Part I. [12Dec11]

[8] A paper including the text of both my December and January essays, together with Table 1 and Figure 1, was  initially made available as a pdf separate on 9Jan12.  That paper was updated on 19Mar12 as [FWGNA Circular No. 1].
Posted by Rob Dillon at 10:51 AM 1 comment: