Somatogyrus in the Southeast - Darkness, Confusion, and a New Hope


I have spent most of my professional career in the company of researchers more knowledgeable of the Hydrobiidae than I. So on the (increasingly frequent) occasions when I collect hydrobiids myself, or have them sent to me by others, or field inquiries from workers around the country regarding this enigmatic family, I have tended to "pass the buck." Or I have done a slapdash job. The purpose of this essay it to record my own personal awakening regarding strikingly similar members of three hydrobiid genera, Amnicola, Gillia, and (especially) Somatogyrus, of considerable conservation interest here in the American southeast. This will be a confession of sorts, addressed to several of my colleagues to whom I have supplied erroneous information in the past, and (I hope) a spur for the reexamination of assumptions that may have been made in similar situations by others elsewhere.


Had I been asked ten years ago for an accounting of the hydrobiid fauna of South Carolina, I would have certainly listed Gillia altilis (the type locality of Gillia being the Santee Canal north of Charleston) and perhaps added Amnicola limosa. The only previously published SC list is that of Mazyck (1913) who includes "Amnicola sp." as well as Gillia. These two vanilla-looking snails are nearly indistinguishable on paper, although Amnicola is smaller, with two ducts on its verge, while the verge of the larger Gillia is single-ducted. But I have always thought of A. limosa as a species of northern lakes, rather than South Carolina swamps, and the NatureServe Explorer database lists Gillia alone.


And in fact, when I first began seriously surveying the freshwater gastropods of this state in connection with the FWGNA project in the mid-1990s, I did begin finding little vanilla-looking hydrobiids with double-ducted verges in slow-moving lowcountry streams which I identified as A. limosa, as well as a smattering of vanilla-looking hydrobiids in the midlands and upstate with single ducts, which I called "Gillia altilis."


The occurrence of Somatogyrus in South Carolina never crossed my mind. The primary reference to Somatogyrus is that of Walker (1904), who described two species from Atlantic drainages further north: S. pennsylvanicus from the Susquehanna River and S. virginicus from the Rapidan River. And the relevant couplet in Burch's key to the Hydrobiidae offers this choice: "Shell generally thick and solid, columella thickened. Mississippi and Gulf of Mexico drainage (except S. pennsylvanicus and S. virginicus) - Genus Somatogyrus" or "Shell rather thin, columella not thickened. Atlantic drainages from NJ to SC - Gillia altilis." This turns out to be a bit misleading, because Thompson described a third Somatogyrus from an Atlantic drainage in 1969 (S. tenax from the Broad River, a tributary of the Savannah) and Krieger added a fourth from the Alcovy and Yellow Rivers (of Georgia's Altamaha System) in 1972. But Fred Thompson himself, in a presentation at the American Malacological Society meeting last June, indicated that he was unaware of any hydrobiids other than Gillia and perhaps Amnicola in South Carolina. 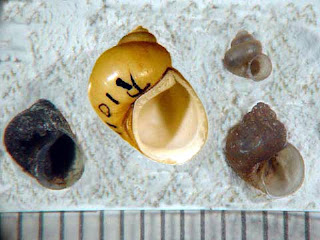 
Looking back, I suppose my awakening began upon hearing Charles Watson's excellent talk at the FMCS meeting in Chattanooga in 1999. Watson reported that he was unable to distinguish among any of the three (nominal) species of Georgia Somatogyrus (tenax, alcoviensis, and rheophilus of the Flint River, a Gulf drainage) "using the characters given in the literature for separating these species." Watson continued, "The supposedly diagnostic characters appear to be subject to more variation than the original authors realized." Watson's paper also highlighted to me how very close the Broad River of Georgia is to the Chauga River of South Carolina, which is inhabited by a population of hydrobiids I'd assumed to be Gillia.


My awakening was completed just last year, when I first critically examined bona fide Gillia in Walker's collection at the University of Michigan. Adult Gillia commonly bear shells in the 7 - 8 mm range, but the snails I'd been calling "Gillia" in SC were rarely much more than 4 - 5 mm. And bona fide Gillia are not heavily shelled, which makes sense for the Carolina lowcountry canal that was the type locality. So the small, very heavily-shelled snails I'd been finding on rocky substrates in the midlands and upstate must be Somatogyrus, not Gillia!


Currently I have records of at least three Somatogyrus populations in SC, inhabiting the Chauga River and Stevens Creek of the Savannah drainage and the Big Cedar Creek of the Broad/Santee drainage near Columbia. And in the course of a larger survey of the southeast currently underway with my colleagues Brian Watson, Tim Stewart, and Will Reeves, we have discovered populations in the Uwharrie, Green, and Eno Rivers of North Carolina. We have unconfirmed reports of Somatogyrus in the James River of Virginia. Just two weeks ago I rediscovered Somatogyrus in the Rapidan River, the type locality of S. virginicus, where it had been feared extinct.


I have compared the morphology of these populations to topotypic S. tenax from the Broad River of Georgia, as well as to S. alcoviensis from the Apalachee River, and found all populations indistinguishable. There are no recorded anatomical differences - all Somatogyrus have simple single-ducted verges with no accessory lobes or crests. Thompson differentiated his S. tenax from S. virginicus by shell character only - "by its smaller size, sloping unshouldered whorls and perforate shell." But the shells born by all populations I have examined show quite variable adult size, shoulder shape and umbilical perforation. It seems clear that a single species of Somatogyrus is widely distributed in piedmont streams from Virginia to Georgia, and that the nomen S. virginicus has priority. It also seems likely to me that this same species extends (or has extended) up to the Susquehanna River in Pennsylvania and down to the Gulf drainages of Georgia, under the aliases S. pennsylvanicus and S. rheophilus.


In retrospect, two factors contributed to the long darkness I suffered regarding hydrobiids in the southeast. One was an over-reliance on historical distribution records, which must reflect collection effort. I assumed that Somatogyrus did not occur in the Carolinas because I could find no record of it, but now it would appear that there is no record of it because nobody has ever really looked. And the second factor was the reliance I have placed on written descriptions, dichotomous keys and published illustrations, rather than on bona fide specimens. Burch's couplet is correct in its first half - the shell of Somatogyrus is indeed much more "thick and solid," and its columella is indeed "thickened" compared to Gillia, and if I had compared shells of genuine Gillia to my specimens, I wouldn't have made mistakes for so many years.


The South Carolina Hydrobiidae are compared above. To be complete, I have included a fourth hydrobiid species from this state, the much-undercollected Amnicola grana. Amnicola grana is as vanilla as the other three local species in shell morphology, but bears an operculum that blossoms from multispiral to paucispiral as it ages, and never reaches much more than 3 mm. I've only recorded it from a few sites in the South Carolina lowcountry, but a rigorous effort would doubtless uncover more.


Somatogyrus alcoviensis has a "global conservation status" of G1 (critically imperiled) on the NatureServe Explorer database, S. virginicus is ranked G1G2 (imperiled) and S. tenax is G2G3 (vulnerable). There's also mention of a "Somatogyrus sp. 1 from North Carolina" in the NatureServe database, with no suggestion regarding conservation status. So the good news is that the single species, S. virginicus, properly understood to range from Virginia to Georgia, is not is not as endangered as some have feared. But the bad news is that Gillia altilis is probably not as widespread as previously believed. I have not seen any specimens recently collected from this state, and its range (almost strictly Atlantic coastal plain, according to Thompson 1984) has been heavily impacted by urbanization. And so the closing moral of this essay is an old one, which bears repeating. The accuracy with which we target our conservation efforts is critically dependent upon an understanding of the distribution, abundance, and taxonomy of the creatures we intend to protect.


The figure below shows strikingly high densities of Somatogyrus on rocky shoals in the Apalachee River, Georgia, May 2004. Some individuals have been stranded by lowering water levels. Click on the figure and zoom in for a closer look in the cracks. 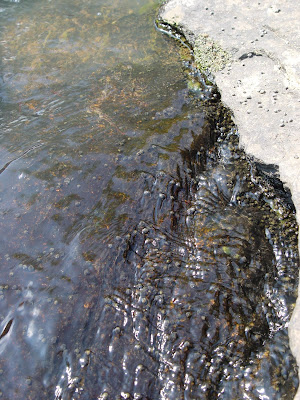 Posted by Rob Dillon at 8:34 PM No comments: