What Subspecies Are Not

Editor’s Note – This essay was subsequently published as: Dillon, R.T., Jr. (2019c) What subspecies are not.  Pp 83 - 91 in The Freshwater Gastropods of North America Volume 3, Essays on the Prosobranchs.  FWGNA Press, Charleston.

Last month [1] we belabored the definition of the word “subspecies,” using as our illustration Pleurocera catenaria dislocata, populations of which inhabit scattered small streams of the lower piedmont and coastal plain from Virginia to Georgia.  And we warned, somewhat cryptically, about the “mischief” that might be precipitated should the concept of the subspecies be misunderstood, promising to develop that theme more fully this month.  So this month let us return to our example of P. catenaria from the lower piedmont and plumb the taxonomic history of the nomen “dislocata” to substantially greater depth.

Edmond Ravenel and L. A. Reeve probably ought to share joint credit for describing “Melania dislocata,” but Ravenel (1834) is usually accorded the honor, by virtue of his earlier publication date [2].  In either case, the nomen “dislocata” was uniformly transmitted at the specific level by Tryon and other 19th century authorities.  Based upon his keen appreciation for the plasticity of pleurocerid shell morphology [3], however, Calvin Goodrich lowered the nomen to subspecific rank under Goniobasis catenaria in 1942 [4].  Burch followed Goodrich, listing “Elimia catenaria dislocata” on page 132 of his 1989 “North American Freshwater Snails.”

I have never cared for the American Fisheries Society’s “Common and Scientific Names of Mollusks” book [5], the second edition of which was published in 1998.  But the policy of Donna Turgeon and her committee of 14 regarding the rank of subspecies was reasonable, and clearly stated on page 15:

“Most subspecies are not suitable subjects for common names, but those forms that are so different in appearance as to be distinguished readily by lay people or for which a common name constitutes a significant aid in communication may merit separate names.  There is a wide divergence of opinion concerning the criteria for recognition of subspecies.  We have usually not named subspecies.”

So for example, Burch (following Goodrich) recognized 50 distinct subspecific nomina in the North American Pleuroceridae.  The great majority of these (44, to be exact) were not transferred by the Turgeon/AFS committee to their 1998 book, and I am not complaining.  Subspecies distinctions are subjective, and often (as we have seen) without evolutionary basis, and if a committee of secondary authorities simply resolves to lump all subspecific nomina under their parent species as a matter of policy, fine.  Turgeon and colleagues did, however, save one subspecific nomen in the Pleuroceridae, Leptoxis crassa anthonyi, together with its cognate L. crassa crassa, presumably because in the judgment of the committee, anthonyi is “distinguishable readily by lay people.”  Okay, I won’t second-guess [6].

My problem lies with the other five subspecific pleurocerid nomina, all in Burch’s concept of the genus “Elimia.”  In these five cases, the Turgeon/AFS committee surreptitiously raised the subspecific nomina of Goodrich/Burch to the species level: albanyensis, inclinans, vanhyningiana, viennaensis, and (you guessed it) dislocata.  Subspecies are not species!  Here in the modern era, specific nomina are not somebody’s subjective opinion – they are testable hypothesis about the reproductive relationships among sets of populations.  What misanthrope thought he could arbitrarily, high-handedly, without any explanation or indeed any notice, promote five subspecific nomina [7], carrying with them no assumption of heritability much less reproductive relationship, to the level of species [8]? 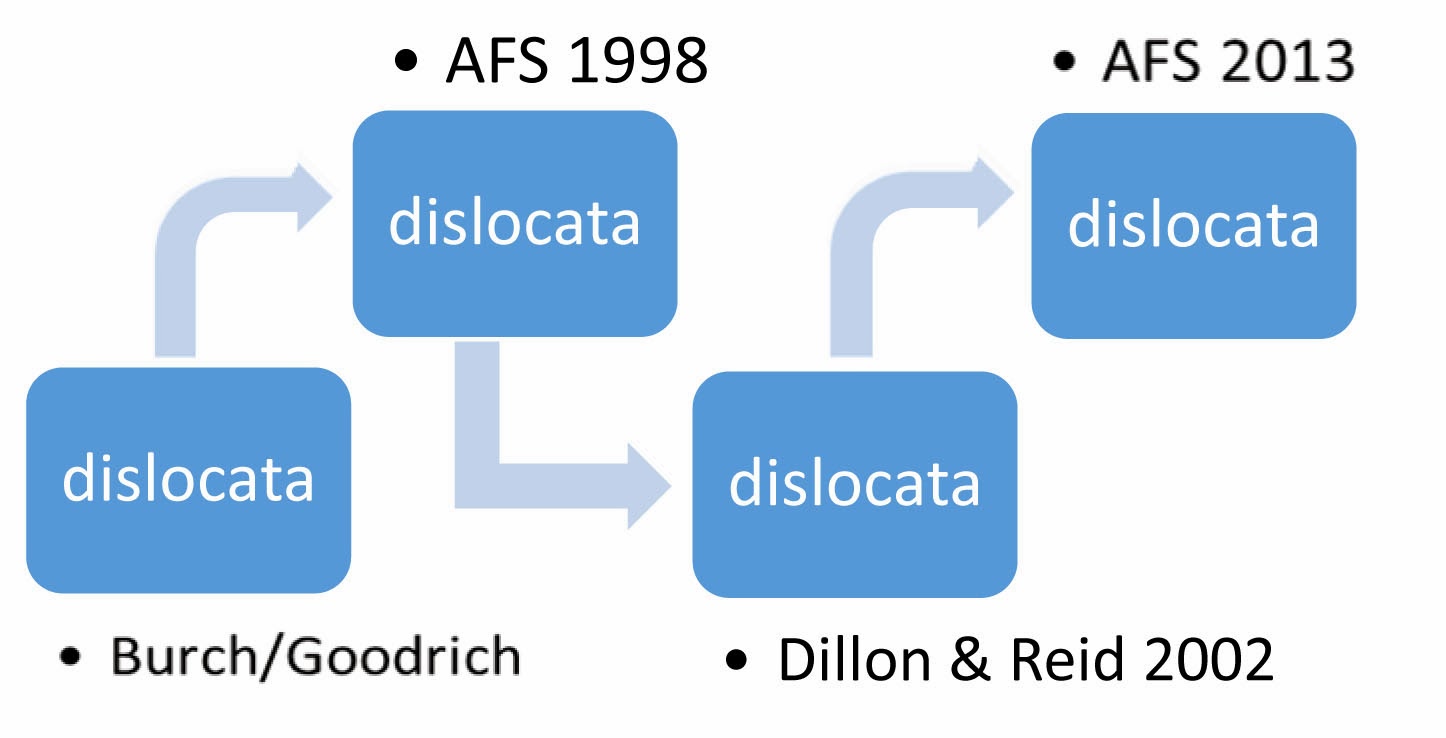 This sort of shenanigans was not the worst thing about the 1998 AFS publication by Turgeon and her committee, but it was certainly in the top five.  How many other such spurious taxonomic judgment-calls might be hidden within its 526 pages?  How many natural resource agencies and conservation NGOs may have uncritically accepted this shoddy excuse for scholarship and propagated it about the country as some sort of “standard?”

I would confess that some personal irritation with the treatment given the southeastern Pleuroceridae by the Turgeon/AFS committee at least partly motivated several population genetic surveys I undertook subsequent to 1998.  Last month we reviewed the 2002 paper I published with A. J. Reed, reporting evidence for multiple independent origins of the dislocata phenotype, strongly refuting the Turgeon/AFS surreptitious elevation of dislocata to the species level [9].  And in 2011 I published a paper in AMB with J.D. Robinson, synonymizing viennaensis and albanyensis back under Pleurocera catenaria, again, and inclinans under Pleurocera floridensis, again [10].  One might hope that hard data published in the peer-reviewed literature should trump the subterfuge of colleagues mired in nineteenth-century typology.  But no.

The 2013 AFS publication by Paul Johnson and committee [11] is 36 pages long, but all one ever need examine is the single mysterious paragraph in which the authors purport to describe their methodology, not saying more than they say.  In our post of 9Sept13 [12] we trained the scientific equivalent of exegesis on the single sentence by which the authors described their biogeographic methods, discovering something most foul hidden underneath.  Here we turn our attention to the two sentences by which they described their taxonomic methods, as follows:

“This list was derived from Turgeon et al. (1998) and updated with subsequently described species and systematic revisions.  Subspecies are not recognized.”

I initially interpreted the four-word rubric, “Subspecies are not recognized” to mean that the Johnson/AFS Committee collapsed subspecific nomina under their specific cognates.   But upon closer study, it would appear that Johnson and colleagues actually meant “Subspecies are raised to the full species level.” 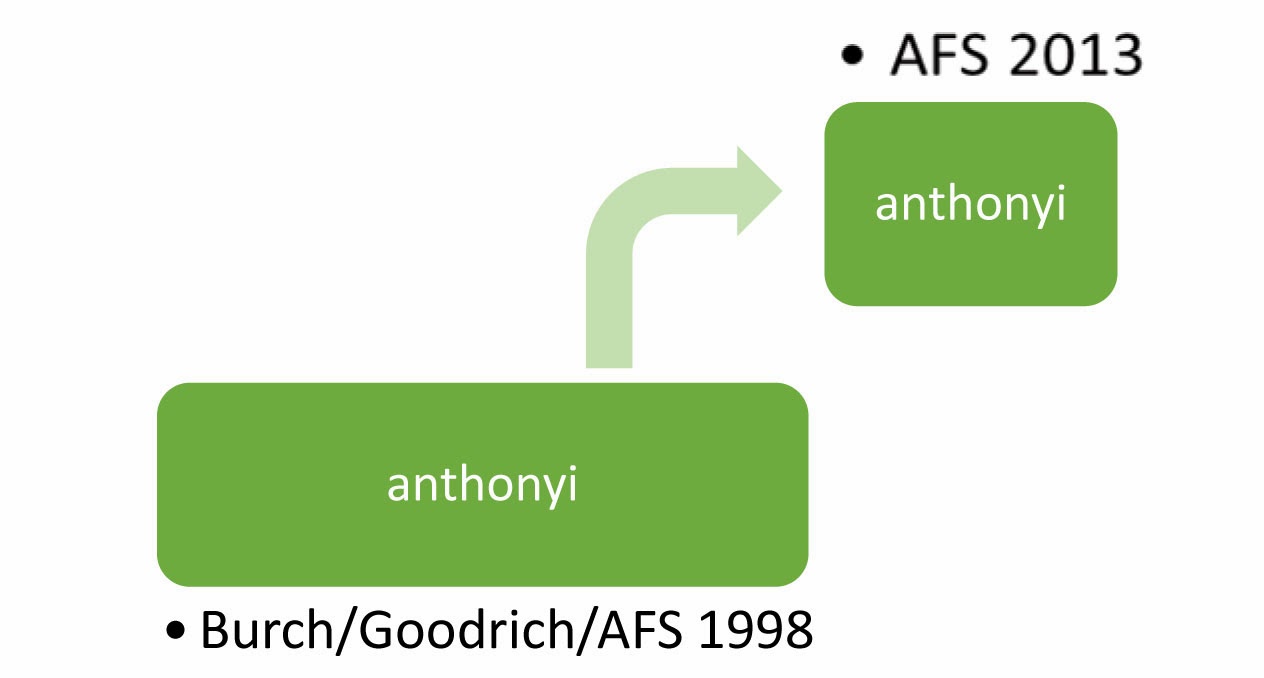 Only one (obvious) set of North American freshwater gastropod subspecies actually survived the 1998 transfer from Burch/Goodrich to Turgeon/AFS: the Leptoxis (“Athearnia”) crassa crassa and L. crassa anthonyi pair.  Johnson and colleagues raised both of these nomina to the species level, on the strength of no research of which I am aware.  Let us call this pattern “down-down-up.”  The nomen anthonyi was a subspecies prior to 1998, continued as a subspecies 1998-2013, and then elevated to the full species level.

The Johnson/AFS Committee also preserved the five subspecific nomina raised surreptitiously to the species level by the Turgeon/AFS committee as species, directly counter to research published between 1998 and 2013 in most cases.  It is difficult to see how all fourteen of my esteemed colleagues could have missed the 2002 paper I published in Malacologia on the catenaria/dislocata pair or the 2011 paper that John Robinson and I published in AMB on albanyensis, viennaensis and inclinans.  So the implication must be that the Johnson/AFS committee was aware that these nomina are only subspecifically distinct (at best!) but elected to re-raise them back to the species level (again), under the four-word rubric, “Subspecies are not recognized.”  This is the down-up-down-up pattern I illustrated at the top of this essay: subspecies prior to 1998, raised to species level, demoted between 1998 and 2013, then raised a second time.

There is one other pattern in the interplay of the two AFS Committees: up-down-up.  The Turgeon/AFS committee followed Goodrich/Burch in recognizing several species that research since 1998 has shown do not warrant recognition at the species level.  The 2011 population genetic study of Dillon & Robinson [10], for example, suggested that the “timida” phenotype is independently derived in populations of Pleurocera floridensis, and in that same year Dillon (solo) demonstrated an identical phenomenon for the “unciale” phenotype of P. clavaeformis [13].  These taxa were recognized at the specific level prior to 1998, lowered to the subspecies level between 1998-2013, then raised to the species level again by the Johnson/AFS committee.

The bottom line is that at least 12-15 pleurocerid nomina listed at the specific level by the Johnson/AFS committee are (at best) subspecies.  But why does this matter? Isn’t everything I have written in my essays over the last couple months just one big prima donna sniping at a little clique of other prima donnas over angels on the head of a pin?  Well actually, it matters a lot.  And I will tell you why.

Subspecies are not valid units of management!  I cannot claim any more than a layman’s understanding of the politics that motivated federal endangered species legislation in 1973, or the state-level laws and policies that have followed it in the last 40 years.  But it seems to me that advocates of such policies have, at least in recent years, primarily rationalized their efforts as desirable for the protection of “biodiversity.” And (again, I think!) the implication is that such “biodiversity” is supposed to be heritable.  Which means if (as research suggests) the traits that distinguish pleurocerid populations bearing nomina valid only at the subspecific level, such as dislocata, viennaensis, timida and unciale are ecophenotypic responses to the environment, with no demonstrably heritable basis, efforts directed toward their conservation are unwarranted.

So at last we arrive at our summary paragraph.  As I mentioned in my February essay, the FWGNA currently recognizes four sets of subspecies, all in the family Pleuroceridae.  We have preserved these subspecific distinctions primarily for their indexing function – all the nomina involved are associated with significant (often historic) literature.  But we have combined subspecific nomina for analysis of relative abundance, and for the assignment of FWGNA Incidence ranks [14].  We make no assumptions regarding the evolutionary significance of the morphological distinctions upon which subspecific nomina are based, nor are any (at present) warranted.

[2] The situation is complicated.  Ravenel listed Terebra dislocata Say (a marine gastropod) on page 11 of his (1834) “Catalogue of Recent and Fossil Shells,” with no figure or description.  Reeve provided a formal description of Melania dislocata in his (1861) “Monograph of the Genus Melania,” stating as he did “The shell here figured is Ravenel’s original type of this species, from the collection of Mr. Anthony.”  So all the older references, including Tryon and Goodrich, attribute dislocata to Ravenel (1834).  But Burch, Turgeon/AFS and Johnson/AFS prefer Reeve (1861).

[3] Goodrich’s appreciation for phenotypic plasticity in the Pleuroceridae has been a long-running theme on this blog.  I’ve published a series of essays touching on it, notably:
[4] Goodrich, C. (1942) The Pleuroceridae of the Atlantic Coastal Plain.  Occas. Pprs. Mus. Zool. Univ. Mich. 456: 1-6.

[6] That’s absurd, of course.  The spectacle of 15 Ph.D. Malacologists convening around a long table to determine which crappy little brown creek-snails “lay people” can or cannot distinguish, and inventing “common names” for the former, sounds like a scene from Alice in Wonderland.

[8] On page 13, the “expert in the field of molluscan systematics who updated the checklist for this volume” for freshwater gastropods is given as Fred G. Thompson.