Review: Field Guide to the Freshwater Mollusks of Colorado

Kudos are due to Mardy Nelson Harrold and Rob Guralnick for their charming little (4 x 6”) book, A Field Guide to the Freshwater Mollusks of Colorado, now available as a free PDF download from the Colorado Division of Wildlife. The authors have pioneered a new model for publication in our line of work, and I personally find some inspiration in the effort.

Our good friend Rob Guralnick has been at the University of Colorado Museum since Shi-Kuei Wu retired in 2000. Mardy Nelson Harrold was his M.S. student and Leigh Anne McConnaughey, who illustrated the new Field Guide, is his wife. Rob tells me that their work was primarily targeted toward the needs of CDW field biologists, but they also hoped that the avid fishing community might become interested. 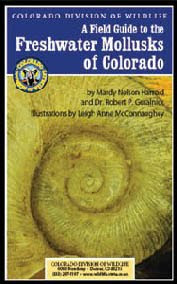 To that end Harrold & Guralnick have produced a beautifully illustrated and cleanly formatted guidebook with 7 pages of introduction in the front, 8 pages of reference material at the back, and 111 pages of identification manual in the middle, covering 25 freshwater gastropod and 16 bivalve species of Colorado. Each species is allotted a pair of facing pages for a brief description, habitat and range notes, and colorful illustrations of the shell, both magnified and life size. Higher taxonomic groups are also introduced with a couple pages of general biological background, and all the species in each group marked with distinctive thumb tabs for easy reference.

Conspicuous by their absence from the Field Guide are literature citations, synonymies, dichotomous keys, anatomical notes, and distribution maps. The scientific name does lead the common name – this isn't quite a bird book yet. But clearly, Harrold & Guralnick are not looking inward toward the Academy, but rather outward, toward an interested and engaged public at large.

The authors dedicated their work to Dr. Shi-Kuei Wu. And it should be clear that A Field Guide to the Freshwater Mollusks of Colorado could not even have been contemplated without the collections that Shi-Kuei stewarded at the University of Colorado Museum for so many years, and the Inventory of Colorado freshwater mollusks he published in 1989 (1).

Shi-Kuei’s 1989 Inventory did feature detailed distribution records and a more complete review of the literature, but is currently out of print. This poses an interesting question. Why didn't Harrold & Guralnick simply update Wu (1989), rather than starting fresh? Might it have been possible for the present authors to preserve Wu’s more scholarly approach, boil his large dot-maps down to shaded figures of a more manageable size, add their lovely illustrations and formatting, and expand the appeal of this new work to amateurs without subtracting any of the utility for professionals?

Maybe not. At some point, formal scholarship becomes off-putting to the general public. And with respect to the taxonomy and systematics of freshwater gastropods, I fear that we professional malacologists may have barreled through the off-put point a hundred years ago. As Exhibit A, I give you the Physidae.

The actual rationale behind the author’s decision to fold Wu’s elliptica, heterostropha, integra, and utahensis into P. gyrina, and to subsume Wu’s anatina, cupreonitens, and gyrina under P. acuta, was the subject of my email to this group last month (3). But how many of you reading my words right now actually had the patience to wade through the tortuous message I sent on October '08, "Backwards Snails Backwards?" Admit it - most of you hit the delete button last month, didn't you?

There are about 175 addresses in my email address book under the FWGNA tab, roughly 50% academic, 25% agency or other professional, and 25% private individual. So I’d guess I've got at least 50 readers right now (maybe 174!) who would have been perfectly happy never to know that somebody used to think there were eight species of Physa in Colorado, and really don't care why somebody else now thinks there are only two ... well, three actually, but we'll let it go. The Harrold & Guralnick Field Guide is for you.

In the final analysis, it’s hard to gauge the size of the audience to which A Field Guide to the Freshwater Mollusks of Colorado will appeal. But whatever the size that audience may be, I’d like to think that it could grow. Rob tells me that his book has won a couple trade association awards, and the first printing (of more than 1,000 copies) is nearly gone. So viewed perhaps not so much as a scientific monograph, but rather as an outreach effort, the Field Guide of Harrold & Guralnick is to be highly commended.

(2) Physa skinneri is a junior synonym of P. jennessi, which is indeed a distinct and valid species. But since Wu (1989) reported skinneri from just five sites in Colorado, I think Harrold & Guralnick can be excused for excluding it.