The Snails The Dinosaurs Saw

Editor’s Note – This essay was subsequently published as: Dillon, R.T., Jr. (2019c) The Snails The Dinosaurs Saw.  Pp 137 - 143 in The Freshwater Gastropods of North America Volume 3, Essays on the Prosobranchs.  FWGNA Press, Charleston.

I imagine most of us are familiar, at least in passing, with the North American Benthological Society ("NABS"), and their excellent journal, J-NABS (1). Published quarterly since 1982, J-NABS has built a solid reputation as an outlet for peer-reviewed research on any aspect of the biota "on the surface of the bottom" of lakes and rivers worldwide. The journal has rarely, however, been seen as a vehicle for anything edgy.

Perhaps in response to that perception, in 1998 a wealthy benefactor endowed the Rosemary Mackay Fund to support the publication of "speculative, forward-thinking, and philosophical" research in J-NABS. There have been four Rosemary Mackie Awards in the last ten years (2).

I am here pleased to announce that a paper by John Robinson and myself has been selected as the fifth winner of this prestigious award. Our work, entitled "The snails the dinosaurs saw: Are the pleurocerid populations of the Older Appalachians a relict of the Paleozoic Era?" leads off this month's issue of J-NABS. A download of the full article is available here [PDF].

One of the perks that accompanies a Rosemary Mackie Award is that the winning paper (and its authors) are featured in the NABS newsletter, In the Drift. This "Article Spotlight" feature for "The Snails The Dinosaurs Saw" is reprinted below (3). I apologize if the tone seems a bit self-indulgent - this seems to be what the editor was asking for.

This is, in any case, as edgy as freshwater snail research gets.
Read on if you dare! 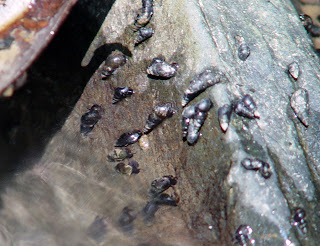 My grandmother once observed, “Robbie Tom sure do love to play in the crick.” This remark she made to my father, as they sat rocking on her front porch at the foot of the Blue Ridge in Patrick County, Virginia. I would have been about 25 years old at the time, sampling Goniobasis proxima from the stream in her back yard for my dissertation research (above).

In one sense, the research project yielding the results that John Robinson and I reported in our "dinosaur" paper would never have been initiated without the Rosemary Mackay Fund. Our hypothesis that a large group of obscure freshwater snails evolved on the west side of the towering ancient Appalachians hundreds of millions of years ago, and then rode the mountains down as they eroded almost to base level, without moving or even noticeably evolving, is simply too wild to publish as conventional science. But in a second, broader sense, I've been working on this project for 40 years.

Because my grandmother was right. For as long as I can remember, I have been playing in the rivers and streams of the southern Appalachians, where the most conspicuous element of the macrobenthos is the pleurocerid snails. Through my childhood in the Shenandoah Valley it was Leptoxis carinata, in the upper New River where I did my undergraduate research it was Goniobasis proxima, and through the piedmont of the Carolinas it was Goniobasis catenaria.

Common sense suggests that these populations must be ancient. The snails have such limited dispersal capabilities that significant gene frequency differences can develop across a three-meter corrugated metal culvert. Yet Goniobasis proxima populations are common in almost every little creek draining both sides of the Appalachian divide from southern Virginia to north Georgia. How could bird dispersal account for such a range?

So perhaps my colleague, Bob Frankis, and I should not have been surprised by the first DNA sequence data we obtained for three populations of G. proxima in the summer of 2000. We found tremendous genetic diversity both between and within populations – up to 16.9% sequence divergence between two G. proxima individuals collected from the same rock in a Dan River tributary from the Virginia Piedmont. To us, these results suggested both that our pleurocerid populations must be ancient, and that natural selection might have acted to distribute gene frequencies across a pair of quite distant adaptive peaks.

But to journal reviewers, such results could only mean one thing – cryptic speciation. My 20 years of data demonstrating random mating within local populations of G. proxima, and no evidence of reproductive isolation between them, carried no weight with most of my immediate colleagues. In the community of phylogenetic systematics, the biological species concept has been replaced by a variety of typological concepts that discount reproductive relationships. The little paper that Bob and I wrote was rejected by four journals, before I finally managed to get the thing published in an issue of the American Malacological Bulletin that I myself guest-edited in 2004. I vowed never again.
.

But in 2006 I read Pam Silver’s editorial in J-NABS, renewing the call for “speculative, forward-looking, and philosophical” articles to publish through the Rosemary Mackie Fund. And I was also fortunate to have John Robinson in my lab at the time (left). John came to Charleston as an M.S. student in Marine Biology, but was always eager for good research conducted in any environment, and blessed with molecular skills far superior to my own. So together we developed a sampling design to extend the results of Dillon & Frankis across 13 populations of three pleurocerid species, and over the eastern continental divide.

Such a project could never win external funding. The mainline systematic community is heavily invested in "Assembling the Tree of Life” using techniques dependent on an assumption of neutrality. Our hypothesis of multiple adaptive peaks in ancient and polymorphic populations is genuinely subversive to such a project. If true, it would imply that “The Tree of Life” can no better be reconstructed with molecules in the 21st century than it was with morphology in the 19th.

So oddly enough, the project overcame its final hurdle when John graduated and moved up to the University of Georgia. His Ph.D. adviser, John Wares, was both supportive and indulgent when a few samples of our freshwater snails slipped into the queue for his sequencer. Our special thanks go to Dr. Wares, as well as to the RMF Committee, for making this research possible.

The hypothesis we are advocating yields quite a few surprising predictions. In addition to challenging the basic assumptions of molecular phylogenetics, our model will upset most geomorphologists, who today think it unlikely that the eastern continental divide has migrated, and most malacologists, who postulate independent origins for American and African cerithiacean snails, and cryptic species in every creek.

But setting aside the craziness, John and I hope that our paper brings forward some assumptions that all we benthologists probably carry in the back of our minds, but may not examine as often as we should. Many elements of the freshwater biota are much older than those of the terrestrial environments surrounding them. All those ancient orders of aquatic insects, for example, probably evolved long before the seed plants that provide most of the primary productivity for the rivers they inhabit today. Standing at creek side, looking down, we look back millions of years. Even if our snails didn't see dinosaurs, that's an important thing to keep in mind.

(1) There's still time to register for the NABS annual meeting, scheduled for May 17 - 22 in Grand Rapids! Once again I've volunteered to man the Gastropoda booth at the "Taxonomy Fair" on the afternoon of the 19th. Come by to see me!

(2) The third in the series was by our colleague Dave Strayer (2006), Challenges for freshwater invertebrate conservation. JNABS 25: 271-287.

(3) The actual article, as it appeared on Page 2 of the Winter 2009 In The Drift, was shortened a bit for publication, and had several additional photos. [PDF]
Posted by Rob Dillon at 11:39 PM