I dearly love experiments. Does it seem to anybody else on this list that, over the last 20-30 years, the experiment is going out of style? In any case, the recently published research results of Pieter Johnson, Chris Solomon, and their colleagues on the community effects of Bellamya (1) invasion, which include both experimental and field components, arrive as especially welcome contributions to our (surprisingly slender) file on the biology of invasive viviparids.

Bellamya populations (2) seem to have appeared in the Northern Highlands lake district of Wisconsin sometime in the 1950s. Johnson and his colleagues (3) conducted an 8-week experiment in a set of 24 outdoor “mesocosms” containing 1,000 of water from nearby Sparkling Lake, a clean sand/gravel substrate (inoculated with lake mud), two cinder block “refugia,” and 45 individuals each of Physa gyrina, Lymnaea stagnalis, and Helisoma trivolvis. Eight of the mesocosms received 45 Bellamya, eight received a pair of crayfish (4), eight received both Bellamya and crayfish, and eight were held as controls. 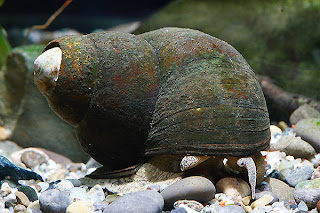 The most striking result of these experiments was that the populations of Physa and Lymnaea grew in the absence of Bellamya, but declined in the presence. The control Physa roughly doubled in population size over the 8 weeks, while the control Lymnaea roughly doubled in wet mass, although apparently did not reproduce (5). But all pulmonate populations declined by all measures in the Bellamya treatments. Clearly the invasion of Bellamya through the lakes of Northern Wisconsin should have negative effects on the native freshwater gastropods, right?

Well, of course it’s more complicated than that. The Helisoma populations declined in both biomass and abundance (5) in all mesocosms, including the controls. Whether the Helisoma were outcompeted by the Physa and Lymnaea, or whether these mesocosms were simply unsuitable habitat for Helisoma, we'll never know. My intuition suggests to me that if the researchers had floated some macrophytic vegetation on the surface of their mesocosms, their Helisoma populations would have been fine (6). The problem is that the experiments of Johnson and colleagues show Helisoma going to extinction in the absence of Bellamya just as clearly as they show Physa and Lymnaea going to extinction in the presence (7). As much as I love experiments, a 5’ x 5’ structural foam plastic tank and a lake are two entirely different things.

Who could disagree? Certainly not our colleagues in Wisconsin. Thus in a companion study, Chris Solomon and a gang of four (including yours truly) surveyed 42 lakes in northern Wisconsin, roughly half of which had been invaded by Bellamya and half not, collecting a great variety of environmental measures in the process (8).

We found evidence of positive correlations between the presence of Bellamya and several general measures of lake productivity, such as conductivity and Secchi turbidity, but very little evidence of an effect of Bellamya on the native freshwater gastropod fauna. At neither the site level nor at the lake level could we find any evidence that Bellamya presence or abundance had any effect on the native freshwater gastropod community at all.

The absence of any significant results whatsoever neatly confirms my hypothesis, of course. Casting an eye back through the FWGNA archives, it looks as though I’ve authored fully 13 previous posts on invasive species, primarily Pomacea, Potamopyrgus, and Bellamya, with other viviparids and Bithynia making cameo appearances. And it may be recalled that I am an advocate of the “empty niche” hypothesis, which dates me back to the 1970s with most embarrassing accuracy.

Essentially, I think that the two best predictors for the success of a potential invasion are that the invading population must be weedy and different (9). Invaders must be adapted to the new environment they are invading, of course, while ecologically different from the native inhabitants – the more different, the better.

The gigantic, filter-feeding, ovoviviparous Bellamya is indeed strikingly different from all the other elements of the freshwater gastropod community native to northern Wisconsin. Hence I would not expect to uncover any competitive effects, and feel quite validated that we did not find any.

But I hasten to add two asterisks. First, populations of four different species of viviparids inhabit the lakes of northern Wisconsin, three of which are gigantic, filter-feeding, ovoviviparous invaders: Bellamya chinensis, B. japonica, and Viviparus georgianus. That our distributional data returned no evidence of a negative relationship within this subset, over 197 sites in 42 lakes, does indeed seem to suggest that our methods may have been too weak to detect even bona fide competition, where it occurs.

Second, a special challenge attends the selection of any invasive species for a study of population biology. What would make the researcher think that any such population has reached the carrying capacity of its environment? Competition cannot begin until some resource becomes limiting. If both Bellamya and Viviparus populations are still growing and spreading through northern Wisconsin in 2009, there is no reason to imagine that either will have any effect on the other.

And in fact, our analysis did return evidence of correlations between Bellamya presence and such measures of disturbance such as boat landings and shoreline housing. This implies to us that Bellamya populations may indeed be actively growing and spreading even in northern Wisconsin, where the invasion may have been ongoing for as much as 50 years.

I conclude with a call for additional research (10). This is a button you have rarely seen me push in this series of essays, both because it is trivially obvious to me that we need additional research on all aspects of freshwater gastropod biology, and because I try not to preach to the choir.

But where other people see "invasive species," I see "model organism." We have been greatly enriched, for example, by a huge volume of first-rate research on Pomacea in recent years (11), and that literature is huge (12). Meanwhile I haven't seen more than a couple papers published on even the most basic aspects of the life history of Bellamya, in total, over the 100-year history of the North American invasion (13). And three paragraphs ago I found myself offering an hypothesis regarding carrying capacities of invasive viviparids without a single estimate of population size, even static, ever taken anytime, anywhere. As easy as invasive viviparids are to sample, sitting on clean sand at the bottom of bathtub reservoirs? Shame on us all!

Keep in touch, everybody!
Rob

Notes
(1) I follow Smith (2000) in preferring the (internationally-recognized) generic nomen "Bellamya" over the (provincial) "Cipangopaludina." See the FWGNA page on B. japonica for details and references.

(2) Wisconsin populations are almost entirely Bellamya chinensis. I did identify B. japonica in five (of 42) lakes surveyed, which were lumped with B. chinensis for analysis. That's B. chinensis on the left, and B. japonica on the right. 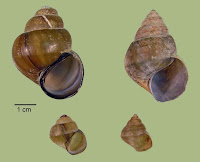 (4) The crayfish were the invasive Orconectes rusticus. Those results were interesting as well, but don’t bear directly on the subject of this essay.

(5) Pulmonate juveniles are born at approximately 1 mm shell length. The sampling problems of finding such “speck babies” in a 1,000 liter mesocosm with sand and cinder blocks should be obvious to everybody. Thus I strongly suspect the “pulmonate abundance” figures reported by Johnson and colleagues are systematic underestimates.

(6) Helisoma is certainly quite commonly observed on floating vegetation. Any sort of additional habitat along these lines would certainly have benefited all three pulmonate populations.

(7) And if there’s a crayfish in the lake, all pulmonate populations are immediately doomed.

(10) This should not be construed as a call to sequence two genes from single individuals sampled from 40 imaginary viviparid species in a vain attempt to reconstruct evolutionary events of 100 million years ago, while remaining arrogantly clueless regarding the basic population genetics of even one crappy pond full of crappy snails today.

Since I’m a newcomer to snail research (although an old hand at invasions), I was hesitant to reply to all. So, below are my comments on your most-interesting essay. I plan to work again next spring and summer at Trout Lake. Doing some quantitative sampling for densities and fecundity patterns could be interesting. Care to join me for part of the venture?

Nice review of the papers by Johnson et al. (2009) and Solomon et al (in press). By the way, in last summer’s experiments with a former student, I also found very little effect of Bellamya on Physa growth rates in the laboratory (Clark and Havel, unpublished data).

See also the paper of Pattinson et al. (2003) on invasive Daphnia. We discuss the same empty niche hypothesis as important for tropical D. lumholtzi invading reservoirs of the south-central US.

I don’t agree that Bellamya are that different in dominant feeding ecology from native gastropods. After all, Bellamya are well known to clean surfaces quite thoroughly, and are for sale by breeders on the internet for cleaning ornamental ponds. Perhaps more important is whether or not resources are indeed limiting. (Although I now see that you consider this later in your essay.)

Regarding your statement about Bellamya being a "model organism." I agree! Lots of ways to study general ecology principles. [e.g., see papers by Havel and Shurin (2004) and Havel et al. (2005)]

Your assertion that we are "without a single estimate of population size, even static, ever taken anytime, anywhere" is an exaggeration, of course. See Solomon et al. (2009): quantitative sampling (see methods par. 4) plus population density estimates (results par. 5). But, I agree that population and fecundity estimates would be useful for better understanding these study systems and the potential of exotic viviparid snails for population growth and expansion.

But regarding your suggestion that viviparids might be easy to sample, "sitting on clean sand at the bottom of bathtub reservoirs," lakes can be spatially very complex (macrophytes, rocks, sand, logs, leaf litter, flocculent organics). I found quantitative sampling to be a real challenge; but then I’m new to the benthos. (I could definitely use some help with these techniques.)


Regarding Smith's (2000) preference for the generic nomen "Bellamya," unfortunately, he's led you astray. The type of Bellamya is from West Africa, and no East Asian species belongs in it (even if you put them in the same genus, there are older names both from Africa and from Asia). See... Mita E. Sengupta, Thomas K. Kristensen, Henry Madsen, Aslak Jørgensen. 2009. Molecular phylogenetic investigations of the Viviparidae (Gastropoda: Caenogastropoda) in the lakes of the Rift Valley area of Africa. Molecular Phylogenetics and Evolution 52:797–805 ...for the molecular data, though they don't deal with the nomenclatural implications, except for incorrectly suggesting that Neothauma should be included in Bellamya- Neothauma is the older name. It's still possible that some other name applies besides Cipangpaludina, but to determine that requires actually checking the type species of the nominal Asian genera.


Have you seen this paper yet? Bury, J.A. B.E. Sietman, and B.N. Karns. 2007. Distribution of the non-native viviparid snails, Bellamya chinensis and Viviparus georgianus, in Minnesota and the first record of Bellamya japonica from Wisconsin. Journal of Freshwater Ecology 22(4):697-703.


Rob, I agree...a "model organism" is just what we have in Bellamya. Can't remember if I sent this article to you. Hope you're warmer than we are here in NJ. Prezant, R. S., E. J. Chapman and A. McDougall (2006) In utero predator-induced responses in the viviparid snail Bellamya chinensis. Canadian Journal of Zoology 84: 600-608.