The Type Locality of Lymnaea emarginata

Editor’s Note.  This post is the third installment of what I think will turn out to be a five-part series on the tangled species relationships of the American stagnicolines.  It’s not critical, but you might find it helpful to back up and read my essays of [22June15] and [14July15] before proceeding onward.

The next two North American stagnicoline lymnaeids to be called to the attention of science, after Lymnaeus catascopium, were L. emarginatus and L. elodes, both described by Thomas Say in 1821 [1, 2].  The figure below, clipped from Say’s “American Conchology”[3], compares the shell morphology of emarginatus (top row) to catascopium (bottom row).  Say wrote that emarginatus “is a somewhat larger, and considerably more ventricose species than L. catascopium, S., and the undulation of the columella is much more profound.”  Say gave the type locality of his emarginatus as “inhabits Lakes of Maine.” 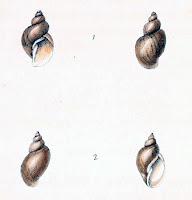 So by great good fortune, in the spring of 2012 my wife won a pair of tickets on Southwest Airlines in a school raffle.  And she began to cast about for potential vacation spots during the first week of July, preferably someplace cool.  And she discovered that Southwest Airlines (if you can believe this) has service to Portland, Maine, from whence (she schemed) we might rent a car to Bar Harbor.  And just as simply as that, her husband had another field trip planned.  This one of a substantially different character than the expedition he detailed in his post of two weeks ago.

So we left our lovely B&B in Bar Harbor on the morning of 5July12, and by early afternoon I was collecting Lymnaea emarginata from Pushaw Lake, about 6-8 miles north of Bangor.  The snails were quite common on rocks in about two feet of water on the west shore of the lake.  It is well that freshwater malacology is not ordinarily so easy, lest everybody should do it.

I had actually done a bit of homework before setting off on this little errand, and so my choice of Pushaw Lake was not entirely arbitrary.  Our good friend Scott Martin reported emarginata populations from four counties in his (quite helpful) 1999 review, “Freshwater Snails (Mollusca: Gastropoda) of Maine [4].”  So I contacted Scott for his specific records, and among the many potential collection sites he forwarded to me was Pushaw Lake, from which Leroy Norton reported “Stagnicola oronoensis” in 1957.  Oronoensis is clearly a synonym of emarginata.

In retrospect, however, I wish I had done more homework than I did.  A closer reading of Scott’s 1999 review would have called my attention to a 1921 paper by O. O. Nylander [5] designating Mud Lake (in remote Aroostook County, 150 miles north of Bangor) as the type locality for Say’s Lymnaeus emarginatus, not Pushaw Lake.  Well, as the whole project turned out, it didn’t matter.

And my efforts to collect a corresponding population of Lymnaea elodes were much more in keeping with my many years of personal experience in the matter of the pulmonate gastropod sampling.  Scott Martin actually listed six Maine counties for dark/skinny elodes-type stagnicoline populations, but his records were far more vague.  His best locality data were for a “Lymnaea palustris” population at the “Andrascoggin River above Rumford.”  And indeed, I found extensive, seasonal swamps along the right bank of the river in that area, absolutely primo habitat for mosquitos on July 5, but no sign of L. elodes.  The ANSP also holds a couple collections from the vicinity of Portland (Stroudwater and Westbrook) where I did no better.

Well, as the whole project turned out, it didn’t matter.  Oops, am I repeating myself in my old age?  This is a chord I have found myself striking with increasing frequency, as my perspective has matured, these latter years of my career.  What we do ain’t brain surgery, I often tell my students.  It’s just snails.

So I contacted Ms. Samantha Flowers [6] immediately upon my return to Charleston, and she was predictably pleased to hear about the bona fide emarginata population I had collected for her from a “Lake of Maine.”  She suggested that if I could ship the Pushaw emarginata to her alive at the University of Michigan Biological Field Station way up by Douglas Lake, she would be interested in attempting some breeding studies with dark/skinny populations of elodes and exilis from the Michigan area.  Which (of course) I was happy to do, out of my own pocket.

And with my July (2012) shipment to Samantha, I also included ethanol-preserved samples of four dark/skinny stagnicoline populations from NW Pennsylvania, which had been sent to me earlier that same the summer by Kip Brady and Andy Turner.  These were the “cryptic stagnicolines” I first mentioned in my essay of 10May12, and mentioned again last month.  Very mysterious, those populations…

…keep your eye on them!  And tune in next month, as we continue our quest to elucidate the tangled systematics of the enigmatic North American stagnicolines with “The type locality of Lymnaea elodes.”

[2] To be complete, it might be argued that Thomas Say described as many as five stagnicolines in the work cited above, including elongatus, reflexus, and desidiosus as well as emarginata and elodes.  Say realized that his nomen elongatus was preoccupied, and changed it to umbrosus himself in his "American Conchology" [3].  The identity of desidiosus as a stagnicoline (as opposed to a fossarine) is controversial – see the remarks of Baker (1911, pp 318 – 321).  I’m not sure what happened to reflexa.  The nomen was passed along by Baker (1911, 1928) as perfectly valid for dark, marsh-dwelling stagnicoline populations of very skinny shell morphology, but appears only as a “form” of elodes in Burch (1989).  I don’t know how it got so demoted.

[6] From this point to the conclusion of the essay, I am assuming that you are familiar with last month’s post,

Email ThisBlogThis!Share to TwitterShare to FacebookShare to Pinterest
Labels: Histories and Mysteries, Lymnaeidae