Editor’s Notes - This is the second essay of a two-part series on an enigmatic population of hydrobiids in Lake St. Clair, on the US/Canada border east of Detroit.  It will only make sense if you’ve read my post of [19Jan16] first.

In late September of last year I began to mentally outline a short series of essays to catch us up on invasive species news, such as have become a regular feature of this blog.  And I thought to myself, what better way to reintroduce the subject of introduced species than to tell the story of an unidentified hydrobiid snail from Lake St. Clair, which must certainly represent an invasion not heretofore recognized by anybody but yours truly, Rob Dillon? 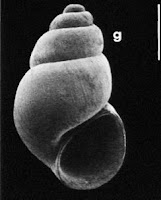 I don’t know why I picked up Bob Hershler’s (1994) Pyrgulopsis monograph [1] and began leafing through it on Friday morning, 9/25.  I knew that Bob had reviewed 11 Eastern species as well as 54 Western species of Pyrgulopsis in that most thorough and useful work.  I also knew that Bob had teamed up with Fred Thompson in 2002 to “resurrect” Baker’s generic nomen “Marstonia,” transferring those 11 Eastern Pyrgulopsis species into it [2].  In the last 20 years I have continued to find Bob’s 1994 Pyrgulopsis monograph very helpful as I have stomped around Georgia and Tennessee, paying respects to endemic or narrowly-restricted populations of what are now called Marstonia agarhecta, Marstonia arga, Marstonia halcyon, Marstonia ogmorphaphe, and others.

I thought I knew the work pretty well.  But on the morning of 9/25, Bob’s image of a 2.8 mm “Pyrgulopsis” letsoni from a small lake west of Pontiac, Michigan jumped out and bit me like a snake.  There are two species of Marstonia inhabiting Great Lakes drainages, not just the one!  And everything about M. letsoni fit our Lake St. Clair unknowns: the shell morphology, the diminutive adult size, the range, indeed the very obscurity of it.

“Amnicola” letsoni was described by Bryant Walker [3] in 1901 from Pleistocene deposits on the banks of the Niagara River in upstate New York [4].  The first living specimens were not collected until 1943, however, when E. G. Berry dug the silt and mud out of the “honeycombed cavities” in rocks from the bed of a temporarily-dewatered stretch of the Huron River above Ann Arbor, and washed the goop through a sieve [5].  The species first known as Amnicola letsoni, and then later as Pyrgulopsis letsoni, and now as Marstonia letsoni is, quite literally, obscure [6].

Amnicola/Pyrgulopsis/Marstonia letsoni is so obscure that all the index entries under “letsoni” in Burch’s [6] North American Freshwater Snails direct the user to incorrect pages.  (Burch’s little line drawing of a Pyrgulopsis letsoni shell is hidden on the bottom of page 238.)  Arthur Clarke [7] did mention (but did not figure) Pyrgulopsis letsoni under Marstonia decepta (page 60), only venturing so far as to suggest that letsoni “may live in Canada.”

But returning to the morning of 9/25, especially compelling to me was the penial morphology.  In his message of 8/28, Bob had described the penis of the Lake St. Clair unknowns as “bifurcate.”  But I have never personally seen a Marstonia penis I would describe in that fashion.  Nymphophiline hydrobiids, such as Marstonia, bear a penis with a single duct plus a glandular lobe.  Typically the glandular lobe is larger than the duct that transmits the sperm, so that the overall nymphophiline penial morphology is bladelike, with a little “penial filament” hanging out along the margin.  E. G. Berry’s figure of the Marstonia lustrica penis at left below is typical.  The adjective “bifurcate” is not called to mind.

But Berry’s [5] figure of the penis of Marstonia letsoni illustrated a glandular lobe much smaller than any I have ever seen in a Marstonia – smaller than the duct that bears the sperm.  The overall morphology of the letsoni penis shown at right above might indeed be described as “bifurcate.”

So on 9/26 I swapped a couple fresh emails with Bob Hershler, asking for clarification on the penial morphology of the Lake St. Clair unknowns, and suggesting Marstonia letsoni as a possible identification.  And here is what Bob said: “I did think of letsoni in this context, but, again, I will need to see more specimens of the mystery snail to nail it down.”  A cautious worker is our good buddy Bob.

Well, those of you who know me, know that I think of evolutionary biology as a science – the construction of testable hypotheses about the natural world.  And the names I assign to populations of freshwater gastropods are hypotheses.  Sometimes they are weak hypotheses, and sometimes they are strong hypotheses, but Rob Dillon’s identifications are never “nailed down.”

So I composed the present two-part essay series in early October, firmly and boldly hypothesizing that the Lake St. Clair unknowns are Marstonia letsoni (Walker 1901), and prepared to go to press.  But there is yet one final twist in this story.  Our good buddy Ron Griffith asked me to delay release of the news as he was (even at that moment, in October) writing up a note for formal publication.

Ron reported that he had access to historical data from Lake St. Clair benthic samples, suggesting that the rise and spread of our M. letsoni population seems to be a fairly recent phenomenon.  In other words, M. letsoni may be a native invasive.  Might its range currently be demonstrating a significant expansion?  Ron also wanted time to send additional samples to Bob H., to try again for that "nailing down" thing.

So as most of you will have subsequently noticed, I wrote essays on three other invasive species topics for the months of October, November, and December.  And in the interim, Ron G. and Bob H. have been busy with the malacological hammer, confirming our identification even to Bob’s exacting standards.  And now at long last, nine months after that first little sample of tiny snails spilled under my dissecting scope in Milwaukee, our six-member team has reached consensus on an identification of M. letsoni.  Cradled in the metropolitan Detroit/Windsor area, bathed in one of the world’s busiest waterways, and yet remaining quite surprisingly, quite literally, obscure.