This is the final installment of my five-part series [1] reviewing an excellent recent paper by Nathan Whelan and Ellen Strong [2] on DNA sequence variation within and among an assortment of pleurocerid populations sampled from North Alabama.  The most important contributions made by Whelan & Strong will turn out to be their large and fine data set on mitochondrial superheterogeneity, and their demonstration that no morphological characters seem to correlate with it, putting to rest the hypothesis of cryptic speciation.  Their paper also sheds new light on evolutionary relationships among the pleurocerid populations of the Mobile and Tennessee drainages, if one is able to contextualize the information they have developed.  Such will be our business in the essay that follows.

Whelan and Strong sampled five populations of Leptoxis picta (which they identified as L. “ampla”) from tributaries of the Alabama River draining south into the Mobile Basin and one population of the widespread and well-studied Leptoxis praerosa sampled from a tributary of the Tennessee River, draining west.  Despite the strikingly high incidence of mitochondrial superheterogeneity demonstrated by the five picta populations, the praerosa population remained genetically distinctive, demonstrating about 13% CO1 sequence divergence from modal picta.  This observation dovetailed neatly with the (nuclear) histone H3 sequence data also developed by Whelan & Strong, and with a much larger (9 locus, 11 population) allozyme data set published by Chuck Lydeard and myself in 1998 [3], all of which combined to strongly reinforce the validity of the specific distinction between L. picta populations inhabiting the Mobile Basin and L. praerosa inhabiting the Tennessee. 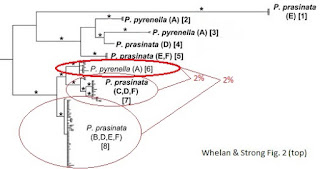 And indeed the larger dataset developed by Whelan & Strong on CO1 sequence divergence did not demonstrate a distinction between any of the six North Alabama Pleurocera populations either.  The gene tree above shows that the modal CO1 haplotype sequenced from the Tennessee “pyrenella” population (“clade 6”) was just 2% different from both the modal prasinata clade 8 and the first-runner-up prasinata clade 7 [4].  But the gene tree below shows that CO1 sequence divergence within the Tennessee “pyrenella” population ranged up to 8% [5]. 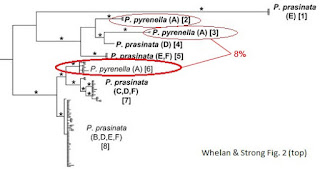 Now here is the second-most amazing revelation to come from the Whelan & Strong’s remarkable data set [6].  In order to explain the amazingness of this revelation, however, I’ll need to digress a bit into the basic mechanics of the NCBI GenBank.  And backtrack to 2011.  So bear with me.

Among the most useful and powerful tools on the GenBank menu is “BLAST,” the “Basic Local Alignment Search Tool.”  A user can call up any sequence from the database, say for example KT164088, the first CO1 sequence Whelan & Strong listed in their Table 1 for modal CO1 clade 8 of “Pleurocera prasinata.”  And then simply click the BLAST button (optimized for more dissimilar sequences), and wait a minute or two.  And the BLAST tool will return the (default) 100 sequences in GenBank most similar to KT164088.  Amazing.  I never thought I would live to see the day.

So W&S uploaded all 5 x 20 = 100 of their “prasinata” CO1 sequences to GenBank, plus all 20 of their “pyrenella” CO1 sequences, for a total of 120 CO1 sequences from North Alabama Pleurocera [7].  You might think that if you simply picked a representative sequence from the modal “prasinata” CO1 cluster and hit the BLAST button, the search tool would return 100 other North Alabama Pleurocera sequences, wouldn’t you?  But this is not the case.  Down toward the bottom of the big list you will get if you perform the experiment I have outlined above, at about 95% similarity with KT164088, you will begin to see a sprinkling of P. clavaeformis from East Tennessee.

At this point in the history of the FWGNA Blog, I have referred to my 2011 paper in Malacologia – the one that synonymized Goniobasis & Elimia under Pleurocera [8] – so often that I imagine you all are sick of it [9].  That was an allozyme paper, involving 9 populations of P. clavaeformis from East Tennessee, 4 control populations of P. simplex, and a pair of carinifera/vestita populations from North Georgia, more about which later.  The summer that paper was published, John Robinson and I sequenced single individual CO1 haplotypes from each of those same 15 populations, in connection with an oral presentation we were planning for the 2011 AMS meeting in Pittsburgh.  We uploaded those 15 sequences to GenBank promptly, although our results were not ultimately published until quite recently [10].  The gene tree looks like this: 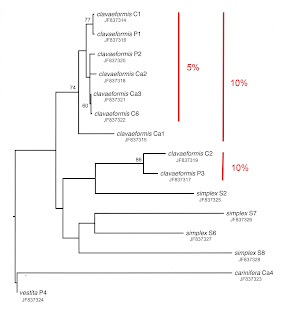 The point that John and I were making in our little note had to do with the hazards of DNA barcoding.  A researcher who naively sets 5% sequence similarity as a cut point for species recognition, for example, will imagine that our 15 populations comprised 10 species, lumping only the 6 P. clavaeformis bearing the modal CO1 haplotype at the top of the figure.  And even at 10% sequence similarity, a naïve researcher would recognize 8 species, where (at most) only 4 exist.

Now here’s a mental exercise for you.  Imagine Figure 3 above rotated 180 degrees.  It will actually fit almost like a lock-and-key into the top half of Whelan & Strong’s Figure 2, like this: I first preached a series of sermons on this topic back in 2009 [11], but The Spirit has moved me into the pulpit again.  The evolutionary relationships between the malacofaunas of the Tennessee River and the Mobile Basin are much closer than anyone has ever realized.  Nineteenth-century taxonomic tradition has always held that the two pleurocerid faunas are completely disjoint, sharing no species whatsoever.  But the shell morphological intergradation we see in East Tennessee from acutocarinata to clavaeformis to unciale to curta is strikingly parallel to the intergradation from carinifiera to vestita to praesinata to foremani observed in the Mobile Basin.  That was my rationale for analyzing a carinifera/vestita set from North Georgia together with the three sets of acutocarinata/clavaeformis/unciale I sampled from East Tennessee in 2011.  It seemed possible to me that all 11 populations might prove conspecific.

On the basis of the ten polymorphic allozyme-encoding loci I analyzed in 2011, the genetic relationship between the two North Georgia populations and the nine East Tennessee populations was ambiguous.  As were the CO1 results I subsequently obtained with John Robinson, reproduced above.  Ultimately I decided to refer to the entire basket-full of Tennessee/Mobile Basin populations sharing this similar, slippery shell morphology as the “carinifera group,” and set the matter aside [12, 13].

The results of Whelan & Strong have reawakened the issue, and brought it roaring back to the fore.  In North Alabama, apparently Pleurocera “prasinata” of the Mobile Basin is genetically and morphologically indistinguishable from Pleurocera clavaeformis of the Tennessee.  This is big news [14].

Science is the construction of testable hypotheses about the natural world.  So I will concluded my long, rambling series of essays on the North Alabama Pleuroceridae with some science.  Pleurocera prasinata populations are moderately common in the main Coosa River and in scattered larger tributaries downstream from the North Georgia populations of P. carinifera and P. vestita I sampled for my 2011 paper [15].  I hypothesize that Coosa River populations of P. prasinata are more genetically similar to North Georgia carinifera and vestita than they are to the Cahaba populations of P. prasinata sampled by Whelan & Strong.  I challenge any of my colleagues with research interests in the Alabama Pleuroceridae to test my hypothesis, using any genetic tools at their disposal.  We’ll be standing by.

[6] The first-most amazing thing is CO1 sequence KT163940, that single blue dot showing at Red-star-14 in the final figure of my May post.

[11] My 2009 series on genetic relationships in the Mobile Basin Pleuroceridae:
[12] As I pointed out in both my essay of 12Oct09 and in my 2011 paper, the oldest name in the basket seems to be Lamarck’s (1822) Melania carinifera.  Lamarck gave his locality as “pays des Chérokées, dansun ruisseau qui se jette dans la rivière d'Estan-Alley,” but I don’t think any English speaker in 200 years has ever had a clue where “la rivière d'Estan-Alley” might be.  Binney (1864) simply abbreviated Lamarck’s locality as “Cherokee Country,” which Tryon (1873) understood to mean Cherokee County, Georgia.  Cherokee county lies in North Georgia’s Etowah River valley, draining SW toward the Alabama/Coosa and the Mobile Basin.  So both Goodrich (1941) and Thompson (2000) followed Tryon in restricting carinifera to tributaries of the Mobile Basin, and I don’t see any reason to question that call here in 2016.  I don’t think any pleurocerid populations looking like Lamarck’s carinifera actually inhabit Cherokee County today, but that whole region has been impacted by the Atlanta sprawl.  Pleurocera populations matching Lamarck’s carinifera do indeed inhabit Etowah tributaries in other North Georgia counties nearby, such as Whitfield, from whence my 2011 population was sampled.

[14] Here’s another mental exercise.  In what sense of the adjective “big” is this news big?

[15] Here I’m looking at a 1993 gray literature report submitted to the Alabama Natural History Program by Art Bogan and Malcolm Pierson entitled, “Survey of the Aquatic Gastropods of the Coosa River Basin, Alabama: 1992.”