Dr. Henry A. Pilsbry was a Jackass

Editor's Note: The only reason I am posting the brief essay that follows is that I need to blow off some steam.  This is entirely personal.  I apologize in advance.

In the winter of 1888-89, while he was yet a student at Brown University [1], my hero Frank Collins Baker [2], just 21 at the time, undertook an expedition to the little fishing community of Micco, Florida, on the Indian River Lagoon.  There he “had the opportunity to compare the species which are common to both the Northern and Southern shores.”  He seems to have collected at least 19 lots of shells during his explorations around Micco, including land snails as well as marine gastropods and bivalves, to judge by collections subsequently catalogued into the ANSP.

The following summer Baker accepted a Jessup Scholarship to work with Dr. Henry A. Pilsbry and moved to Philadelphia, carrying the collections he had made around Micco with him.  And in September of 1889, his mentor Pilsbry published Baker’s first scientific paper [4] in the very first volume of The Nautilus [5], entitled “Notes on Floridian Shells” [6].  Here is the third paragraph of that four-paragraph note, quoted in its entirety:

“I was very much surprised to find in one of my hauls with the dredge, a number of very perfect specimens of Turbonilla interrupta Totten, associated with Odostomia interrupta Say, and also Nucula proxima Say.”

Those “Turbonilla” shells, subsequently reidentified as Truncatella pulchella (Pfeiffer) [7], can still be seen in the ANSP collection today, catalogue numbers 60124 for adults and 60344 for juveniles.  Their locality data remain exactly as Baker wrote on his labels in 1888, and as he published in 1889, “off Micco, Fla., Indian River.”

The image below was posted on Facebook back in April of 2019 by our good friend Paul Callomon, collection manager at the Academy of Natural Sciences of Philadelphia.  It shows an outrageous slander on the name of my hero, written in the unmistakable chicken-scratch of Dr. Henry A. Pilsbry. 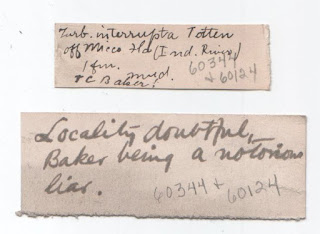 This is inexcusable.  I cannot find any reason to doubt that F. C. Baker collected those two lots of shells from the Indian River at Micco.  But if Pilsbry did have doubts, he could have broached them with his young protégé right there man-to-man, as Baker was standing in front of his editorial desk, manuscript in one hand and shells in the other.  There can be only one reason that Pilsbry accepted Baker’s paper, published it, and then impugned the young man’s character because of it.  Dr. Henry A. Pilsbry was a jackass.

Thanks, I feel better.

[4] He had one prior publication – a description of the Conchology Department in “The Old Curiosity Shop” of California.

[7] The sample that Baker identified as the pyramidellid “Turbonilla interrupta” turns out to be Truncatella pulchella, an amphibious gastropod of Florida and Caribbean coastal environments [8], apparently washed from its near-shore habitat into the deeper waters of the Indian River.

[8]  It is certainly possible that Pilsbry subsequently realized that Baker’s little sample of snails were truncatellids, not pyramidellids.  Then why not assume that Baker was mistaken in his identification, as the curatorial staff at the ANSP does today?  Why imagine that Baker lied about his collection locality?  Arrogant jackass!  Takes one to know one.

Email ThisBlogThis!Share to TwitterShare to FacebookShare to Pinterest
Labels: Biographies